“The amount of research here is astounding. We’re suckers for well-grounded fiction, and on the technical side, The Martian is exemplary … witty … funny”

“If the oxygenator breaks down, I’ll suffocate. If the water re claimer breaks down, I’ll die of thirst. If the Hab breaches, I’ll just kind of explode. If none of those things happen, I’ll eventually run out of food and starve to death. So yeah. I’m f#*@%*.”

The Martian is a Science/Fiction written by Andy Weir. The author is a computer programmer by profession and a space nerd by hobby.

Originally Andy Weir published this book for free on his blog. Andy Weir’s blog readers who found it difficult to download the pdf files requested if he could upload it as in eBook in Kindle where they could download it to their electronic device. It was published as eBook in 2011. Andy Weir then posted in Kindle. In Kindle if you are posting your book it will not allow you to publish for free, he had to charge a minimum 99 cents. EBook sold out a lot and then the publishers took interest and approached Andy Weir. It was later published as printed edition in 2014. 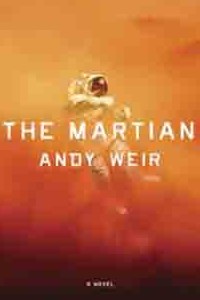 Story is futuristic; it is assuming that it is about 20 to 30 years from now when we could send manned spaceflight to Mars. This is actually happening during the third such mission at Mars. Six astronauts in a crew in this mission, six days from when they landed at Mars due to a catastrophe by the nature they had to abort mission and leave Mars. The protagonist Mark Watney gets hit by an antenna and gets lost in the dust storm and the crew couldn’t locate him and had to leave him behind thinking he was dead. Surprise, surprise, Mark was not dead. Mark has no way to communicate to earth that he was alive. Crew had set up a hab for shelter, it has an oxygenator, water re claimer, if any of these did not fail, he will eventually run out of food and starve to death.

Technical and scientific information in the book is astounding. It is like taking a crash course in relativistic physics, Botany, Chemistry, Astronomy and Astro Dynamics. It is like reading a journal of a science nerd who is also very funny. The astronauts when they are chosen for a mission they go through a lot of psychological analysis at NASA. It is very important that people have compatible egos when they go on a long mission like this. Not just compatible egos, they have compliment each other, cover for each other as they may have their life depending on it. This book got that part right. How astronomers are super cool, they specialize in more than one field.

Mark is a botanist and also a mechanical engineer. The coolest part was the commander of the spaceship was a woman. The last chapter where she takes charge of the situation, it was whopping good! Here is the line – “Oh,” Lewis said, “Well if you won’t let us then— Wait…wait a minute.… I’m looking at my shoulder patch and it turns out I’m the commander. Sit tight. We’re coming to get you.”
I loved this quote ““Astronauts are inherently insane and really noble.” It is so true is so many levels. They are just plain brave.
Communication system is the key in this book that you have to read it to believe it. Mars is anywhere from 5 to 20 minutes away from us, if crew have a question it will take at least 24 minutes to get an answer back from NASA. When Mark loses radio connection with earth it was nerve wrecking.

Mark’s character is by the book how an astronaut have to function, he sees a problem, he does not get depressed, he just thinks of steps of solving that problem and he solves it and then he faces another problem again he thinks it through find another solution take it step by step and solves it again and of course he has to crack jokes. What fun would it be to read about a depressed astronaut? Mark Watney was the best candidate to be marooned on a planet with no form of life.

My favorite part in the book is how it shows that the NASA, JPL team, Crew on the space, Director of the Mars mission comes together and works day and night to get this one man back to earth. I am impressed to see how NASA works. How they are so diligent, how they solve the problems remotely, how they send instructions to build something out of duct tape and canvas tarps and whatever resources that was available to the astronaut at the given time and space. The book shows the scientists, astronauts and engineers as geniuses that they are.

I had to read couple of times to understand about some technical information in the book, like how he separated oxygen from Hydrogen and store oxygen and couple of more experiments like that but I am glad that the author did put those details in there to keep it authentic.

I would recommend this book to all the science nerds out there and also people who love some humor along with science. If you are a fan of NASA and astronomy, this is your book to read.

Mark Watney* has a problem. Quite a big problem. He’s stranded on the planet Mars (it’s a long story) with a year’s worth of supplies. No one on Earth knows he’s alive and the planned return mission won’t land for another five years. What’s a guy to do? Well, most of his survival tactics seem to involve setting fire to his habitat…

Andy Weir self-published The Martian in 2012 and if there’s any proof needed that self-published novels CAN be good, then this – emphatically – is it. The self-published ebook sold like hotcakes before it was picked up by a print publisher the following year and it’s now in development as a big-name movie.

The story is good, solid, hard science fiction, a cross between any castaway story you care to name and any astronaut-in-peril story you care to name. There’s a healthy dash of techno-thriller in the mix with plenty of MacGyveresque science to keep the nerds happy. To be honest, some of the technical descriptions left me standing but it’s easy enough to step around these points and get on with the story.

The writing is strong, competent and easy to read. However, the delivery swaps between First Person (Watney’s Mars Survival Journal) and Third (events back on earth. This jarred to begin with in more ways than one. In particular, Watney’s personal account helps to build a strong and sympathetic character portrait, whereas the characters covered in the other sections seem to lack any real oomph, faceless bodies for the most part, whose only role is to move the plot forward. As the story moves forward this becomes less of a problem, but it never quite goes away and the book suffers for it.
But what the hell?! The plot is a real corker! While it’s nothing new (stranded, struggle to survive, race against time), follows a very linear and predictable course and the eventual outcome is hardly beyond doubt, Weir somehow manages to weave a classically unputdownable story that easily transcends the narrative problems and literary clichés. I loved it.

It’s been a long time since I’ve read deep into the night but, having started reading one evening in bed, I eventually had to force myself to go to bed at 2:30 the following morning and then squeeze in a couple more chapters before trudging – gritty-eyed – to work a few hours later. Every other chapter seems to be a cliffhanger and the lead character is so engaging (and witty) that you’re dragged (willingly) from page to page.
In spite of its flaws, this is an enjoyable and hugely impressive début.
* “Mark Watney” is no name for an astronaut. “Buzz”, “Buck” or “Jim” perhaps, but “Mark Watney”? It makes the poor guy sound like the third-in-line heir to a failed brewing empire…