Anita Nair - Muezza and Baby Jaan Stories from the Quran

“The wealth of its stories, and the lyricism, poetry and flow of its narrative make it as much a literary text as a holy book.”

Anita Nair began writing this book after hearing of a terrorist attack in a mall in Kenya – those who could name the Prophet’s mother had their lives spared. Most Muslim children – in fact most children – she felt, did not know quite a few basic facts about their religion and in a time of vitriol, the book was her answer. Following the tried and tested Arabian Nights format she takes two characters, a baby djinn and a cat – the Prophet’s cat actually – both of whom are lost.

The djinn, Baby Jaan, despite being quite young, has the ability to shape shift and she turns into a small white camel. The two lost souls become companions – Muezza the cat, being a cat is reluctant at first but then takes pity on this young creature who seems to know nothing about God or the human world. To pass the time he begins to tell her a series of stories. 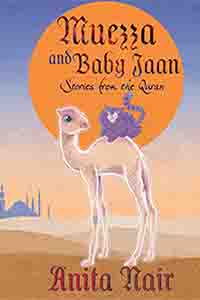 What is remarkable is the similarity between the Old Testament and the Quran where the world’s origins are concerned, though the names of the characters defer. Noah and his ark become the story of Nu and his ark, the fall of the first man and woman from Paradise, the story of Cain and Abel. There is a reason why Jews and Christians are known at People of The Book by the Muslims and this comes through. Occasionally the Torah and the people of Israel too are part of the narrative.

Nair intersperses stories with different episodes of shape shifting – Baby Jaan comes to Muezza’s rescue and vice versa. While narrating the stories from the Quran, Nair tells a story of how two different beings can become friends.

The book is a weighty size for young hands but was perhaps intended for a grandmother’s lap and a snuggle session with the stories as background – Muezza suggests as much to Baby Jaan. The illustrations too are there to add interest for children.