Ann Rule - The Stranger Beside Me

“As dramatic and chilling as a bedroom window shattering at midnight”

This book has been on my tbr for a long time as the blurb really caught my attention.

Writing about an investigation of a psychopath who mercilessly maimed and killed a number of young women in as many as 6 different places would entail enough horror without the said criminal being someone known!

And Ann Rule knew Ted Bundy, the man accused of, tried several times and finally given the death penalty for numerous horrific killings through the late sixties and seventies. 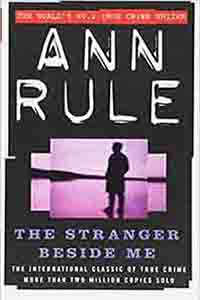 It is a very, very detailed account going from Ted’s first meeting with Ann at a crisis centre to his life after that, crisscrossed with his childhood days and the crimes that shocked the nation. As the author says she couldn’t decide whether the person she knew was guilty of the heinous murders he was accused of, the tone of the book reflects the same. For the reader, knowing he was given the death penalty, and reading it well after the events that transpired, it is at times difficult to accept the author’s seeming empathy towards this man who destroyed lives for no reason!

He seems to have been someone whose mind should most definitely have been studied, in order to gain knowledge of how a human being can inflict the torture that he did on his victims. A smooth operator, he managed to string along several women in relationships and always had their support, even through his trial years and years of incarceration! While it is difficult to imagine how he snared so many young victims now, given the stories from those who barely escaped after being approached by him at various times, he seems to have possessed some charm that worked on many women.

At least to the extent that he could overpower them and do what he wanted with them.

When he was finally caught, he was belligerent enough to protest his living conditions in prison and demand a lot of things, including whatever he needed to act as his own defense.. An act that may have led to his downfall as much as the physical evidence did. He managed to escape from prison, showing his resourcefulness.. And he managed to keep the death penalty at bay for years after he was convicted on three counts. Definitely not a run of the mill guy.

But because of the nature of his crimes, it is impossible to actually feel anything but disgust for him, no matter how fascinating a character he may seem. When the author, who herself only worked with him one night a week for a year, tries to emphasize that he should not have been killed for what he did, a lot of factors hinder the acceptance of this statement. Also, her relationship with him seems to have rapidly escalated with him calling the shots most often!

Even way after there was evidence that he was the man responsible for the crimes, she continues to wonder and that’s uncomfortable.. She didn’t know him that well for sure! His contention that she benefited from knowing him seems true for sure.. Pitying him is really out of line in my opinion.

The book overall is an account of how easily one man hoodwinked the police forces, detectives and even the FBI for numerous years and then played the legal system for several more years, before getting what surely was his due.