The story begins, as so many of Conan-Doyle’s Holmes adventures, in the drawing room of 221b Baker Street. Our heroes sit before the fire, Watson lost in reverie when Holmes interjects with a seemingly miraculous divination of his friend’s innermost thoughts. Watson expresses incredulity, which is quickly over turned as Holmes explains his elementary reasoning. But then comes a knock at the door, closely followed by a respectable, but disturbed, gentleman with a singular tale to tell and, suddenly, the game’s afoot!

From the very beginning we know that Horowitz will be providing us with a deeply reverential homage to the Sherlock Holmes canon, written in a contemporary style, from Watson’s slightly befuddled perspective. Done with love, affection and most importantly, a straight face. I can’t count myself as a Holmes nerd, but I know the stories well enough to guess that ACD would approve heartily of this addition to the series. 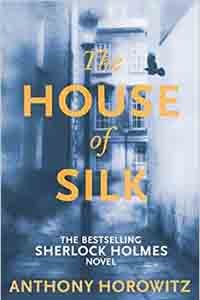 But! This is no slavish, faux Conan Doyle and Horowitz retains his own style, delving deeper into the story, writing descriptive passages with a level of detail that ACD rarely, if ever, executed himself. It is partly by this means that Horowitz crafts a decent-sized novel from a story that ACD would have polished off in a much smaller work. Similarly, Horowitz displays a sense of humour in his writing that ACD never did. Thus the following two short passages exemplify the character of much of the book…

“She was wearing a small bonnet and had a fur stole across her shoulders, although I shuddered to think what creature had provided it, nor how it had met its end. Starvation seemed a likely option.”

“There was a portrait of the Queen above the fireplace, painted, it was said, by a member of the (Diogenes) club who had insulted her by including a stray dog and a potato although I was never able to grasp the significance of either.”

Not that Conan Doyle wrote without humour but, it is very clear that this is Horowitz writing as Dr John Watson (a more intelligent, introspective and reflective Watson, to be sure) and not Horowitz trying to write as ACD writing as Watson.

Note also that the story itself, the case, is more convoluted than many of ACD’s Holmes stories. True, in those, Conan Doyle/Watson bigged up the case mercilessly, describing each as a singular affair of great mystery and complexity but in most cases the circumstances would be odd or outlandish but not especially baffling and often somewhat contrived. Horowitz clearly felt that the onus was upon him to go to town on the twists and turns, to deliver a crime thriller that could stand alongside the best of today’s. In many respects then, House of Silk is not only a worthy successor to the ACD canon but is, dare I say it, an improvement?

Many of our old acquaintances make their appearance in the story. The Baker St Irregulars, Mycroft and, of course Mrs Hudson all play their part in House of Silk but, for Inspector Lestrade, there is a central role. Here Horowitz does turn from the path laid by ACD, for he feels the need to deal with this heretofore arrogant and not especially gifted detective in a rather more sympathetic way than did ACD, who, in the manner of the times, was happy to call a spade a spade, or at least call an incompetent fool an incompetent fool.

In the modern telling, however, Lestrade is revealed to have been misunderstood to some extent. While it does seem to be pandering somewhat to modern sensitivities, I think the story can stand it and it is in fact rather nice to see Lestrade of The Yard showing his mettle.

So. Horowitz has provided, I think, Holmes fans with a valuable addition to a revered detective story series. Written with skill, care and respect, the story should offend few of Holmes and Watson’s fans (there will always be a few who disapprove). Nevertheless, Horowitz retains his own identity as a writer and this is still very much his own book, distinct from Conan Doyle’s style and so much the better for that.