“A fix of high comedy from a writer who provokes almost as much as he entertains.”

I was having a rather raucous, and slightly tipsy discussion with a friend one Christmas about the implications on the legalisation of drugs and she suddenly leapt up, run off and disappeared.

A moment later she returned with a book in her hand and thrust it at me ‘You must read this, you’ll love it!’, and this my friends is how I became a fan of Ben Elton as an author.

High Society, like many other of Elton’s books is high satire and it’s set within the British Parliamentary system and is set around one backbencher’s chance to make a private members bill a reality. However, this isn’t some small insubstantial law as he wishes to legalise all drugs and puts forward a pretty good argument too. The press lap it up and suddenly everyone knows his name, his entire life is turned upside down but he’s making waves he doesn’t even know about. 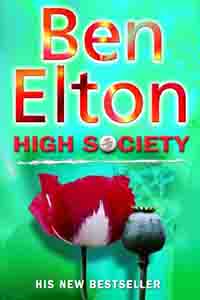 What follows is a brilliant, and believable satirical look at British parliament, family life, the tribulations of notoriety and a very clever and insightful look at the ‘war on drugs’. It’s witty, it’s pacy, it’s a thrilling ride with plenty of laughs along the way but it’s also very clever and didactic, as Elton’s works often are and makes a very good argument on both sides of the debate.

This was my first Ben Elton book but I recently reread it and have gone on to read lots and lots by the author. He’s very clever and insightful and as this and many of his other books show, truly underrated in his time.