I heard about Ben’s book when it very deservedly won “BBC Radio 4 Book of the Year”. It’s the diary of Jay Golden a misunderstood teenager who makes a career of getting himself sacked.

These pieces had me laughing out loud at his misfortune and his hilarious antics, which get him into enormous trouble with his always stressed father.

There is also a serious side to this book, which had my mascara running, as I felt myself empathising with Jay, whose Mother is dying of cancer. The relationships between Jay and his family are all very relatable to everyone, I especially loved his relationship with his younger brother, who looks to his hapless older sibling for support at a difficult time in their lives. 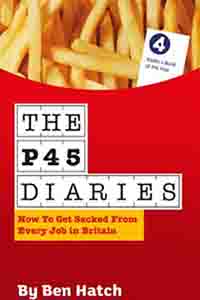 If you want to read a book that’s beautifully written and is both sad and hilariously funny in equal measures, go and get yourself P45 Diaries, I can’t wait until my next holiday, so that I can immerse myself in Ben’s other books.