“Bold, hilarious, honest, and singular. Words once assigned to Billy as an entertainer will now be attributed to him as a writer. Unprotected is a record of survival, commitment to authenticity, and healing; a road map out of hell.”

Billy Porter is the incomparable Grammy, Emmy, and Tony Award-winning actor and singer, and now, he’s added author to his list of talents with the publication of his memoir, Unprotected. His diverse career spans music, acting, and singing but he is perhaps best known for playing Lola in the Broadway musical Kinky Boots, playing the enigmatic MC, Pray Tell, in the Emmy award-winning show Pose, and, of course, his breath-taking and game-changing fashion moments on the red carpet. Porter’s memoir reminds readers that it is easy to be yourself when what you are is in demand but growing up Black and gay in America hasn’t always been easy for Billy Porter, of those like him. 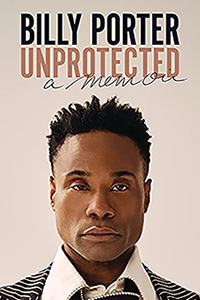 Billy Porter’s autobiography begins in his childhood and traverses his life right up to modern-day as he struggles with life in a pandemic. As a child, he didn’t fit in, in his Pittsburgh hometown. He was sent to therapy to ‘fix’ his effeminacy, bullied at school, and sexually abused by his step-father, his coming-of-age is full of darkness and trauma but he turned to his creativity and art for saviour. As an adult, Porter still struggles to heal in a world that has taught him that his love is not unequal to that of heterosexual people. He is also fighting against a world that is not only homophobic but racist, and the reader sees this reflected in the stumbling blocks he comes up against in his career, and also his reflections of the murder of George Floyd, Breonna Taylor, and so many others in which Billy Porter opens up to show us the rawness and pain he feels at the state of America.

The memoir covers Billy Porter’s highs and lows, from his childhood to his fame, from declaring bankruptcy to living out his Broadway dream, from the heartbreak of losing loved ones during the peak of the AIDs epidemic to finding joy and love in life, as he pours out his story, his emotions and his heart on the pages of this book.

Unprotected is a powerful, revealing, and brilliantly honest memoir that explores race, sexuality, religion, and the healing power of art.

For anyone that already loves Billy Porter, this memoir will only make you love him even more, as his words allow the reader to understand further the depths of his thoughts and actions that make him the man he is today. Perfectly written, you can hear Billy Porter’s strong voice throughout the narrative as he showcases his true self that made him the icon he is today.

One of the best autobiographies I have ever read, Billy Porter’s Unprotected: A Memoir is a beautiful story of trauma and healing, determination and talent, and unashamed queerness and Blackness.