“A very good insight into the freedom struggle of India by many respectable intellectuals.”

Its a wonderful manifestation of India’s freedom struggle, right from the revolt of 1857, the formation of Indian National Congress, myths and realities of its formation, It also beautifully scripted the socio and religious reforms that took place, this chapter reminded me of the Renaissance season of the French Revoultion. Then it goes on to explain the economic exploitation of British’s Imperialism and how did the Grand Old man of india, Dadhabhai Nauroji boldly stood against it.

Then comes the actual national struggle with the Swadeshi movement.
The best parts of this “manuscript” is the way author connects different dots, for example, how did WW-1 and WW-2 brought about bring change in the mentality, policies, strategy of both British and British India.

At a moment the analogy reaches its peak when author tries to connect the concepts of no-changers, pro-changers, swarajists, reformists, left, right, socialists, communalists, communists, etc., 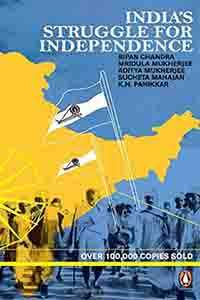 Wonderful representation of the views of Revolutionary “Terrorists”.
What I loved about this book was, It is not all biased, not even to Gandhiji, author maintained perfect balance in criticizing at the same time appreciating different ideologies that existed during that time.

Quit India Movement, Divide between Hindus and Muslim , extremists organizations. Slip of MA Jinnah from INC to league , what not, there is everything in this book.