Just finished Labyrinth of Ice by Buddy Levy. Non-Fiction.  Mr. Levy strikes again.  He has written about Cortez, The Search of the Amazon and Davy Crockett.  Now he takes on the North Pole before it has been conquered, where the prize now is farthest North.  But the real prize is survival.  We have read stories of complete survival and of Complete loss.   This time we take on the few who barely survive, where the amount of the loss is almost incomprehensible.

The Greely Polar expedition in July  of 1881 is one such amazing story. They will reach their goal of farthest North, but that really is only where the story begins. 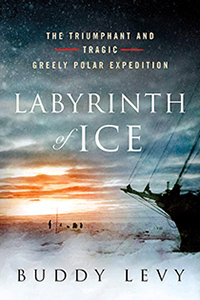 When the resupply ship scheduled for the following year doesn’t come, than the real adventure begins
Disaster courts more disaster and just when it looks like the Greely party will never be rescued Mrs Greely takes her part at the front of the line, and because of her important connections which include Robert Lincoln and Chester A Arthur, the current President of the United States, she is able to raise one more attempt to find them and bring them back home.

The story starts a little slow, but by the end you will be hanging on every word as time is running out so quickly for the survivors. A courageous story of courageous men. Recommended.