“Reading this terrific, Orwellian novel you almost hold your breath.”

Widowland by C J Carey is an interesting work of alternative history with a strong feminist message, and I was gripped by it from beginning to end. The book is set in 1953, in a version of Britain which became a member of a Grand Alliance with Germany and the Axis forces during World War 2. While the country is about to celebrate the coronation of Edward VIII and his wife and Queen – to – be, Wallis, the real power in the country is held by its Protector, Alfred Rosenberg, a man with very definite ideas about women and their place in society. 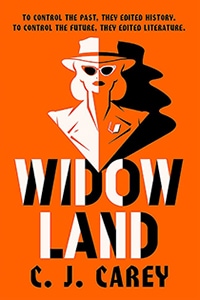 Women are classified on criteria like appearance, bloodline and fertility and are divided into groups ranging from the socially elite “Gelis” to “Lenis” or professional women to the bottom of the pile “Friedas”, widows, spinsters and those too old to produce children. The narrator of our story , Rose, is a Geli who works in the Ministry of Culture rewriting great works of literature to conform with the ideals of the Alliance. When stirrings of rebellion are seen ahead of Hitler’s visit for the Coronation, including graffiti consisting of literary quotations, Rose is sent undercover to investigate a group of Friedas living in poverty in the poorest and most run down part of the city, colloquially known as Widowland. What she learns will cause her to question herself, her role in society and how far she is willing to go to pursue what she believes to be right.

This was a completely gripping book, I could barely put it down as I was so invested in the world the author had built, just different enough from the history we know to make the familiar feel new , and with a dystopian edge that I really enjoyed. I loved how the author wrote about books and literature and how important and necessary they are for society. As a character Rose goes on quite the journey over the course of the book, and as she changed so did my appreciation and enjoyment of her, I also appreciated the thought the author had put into capturing the detail of what day to day life would likely have been like, it gave a grounding of reality to the story.
I read and reviewed an ARC courtesy of NetGalley and the publisher, all opinions are my own.