Caitlin Moran - How to Build a Girl

“Spirited coming of age novel romps from strength to strength…I’m a Moran fan.”

How to Build a Girl is a coming-of-age fiction novel by Caitlin Moran which centres around Johanna Morrigan (Dolly Wilde), a teenage girl growing up in Wolverhampton in the 90s who dreams of becoming a famous music journalist and living in London.

Whilst the book is semi-autobiographical with its correlations to Moran’s own childhood on a council estate in Wolverhampton, the author notes that the characters actions and people she meets are works of imagination, adding, “This is a novel and it is all fictitious.” 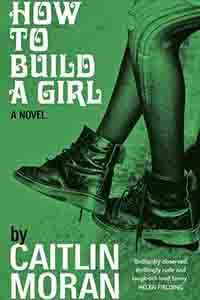 Johanna Morrigan decides that to make it in the world she must reinvent herself as the outrageously extroverted Dolly Wilde, a reinvention which results in Johanna truly learning who she wants to be and what personal development really means. “I have made my notes, now, you see, on how to build a girl… you fake it ‘til you make it.”

Alongside the unforgettable Johanna Morrigan, Moran has also written a cast of brilliant support characters including; her sweet younger brother Lupin, her drunken but loveable Father, her Mother whose battle with mental health is touched upon, her colleagues at the D&ME, and her older brother Krissi, with whom she shares a heart-warming bond of friendship and sibling mockery.

As well as having a light and comedic air, the book also pulls heavily on the more serious topics of poverty, austerity, and benefits in 90s Wolverhampton, which is sadly still a reality in many communities today. But it also holds a note of hope, which is still very much relevant in contemporary society, that no matter how small you feel, you are not insignificant. Moran writes, “I saw what an achievement it was – the will of a small, countable number of men and women, who wrote, and though, and marched and sang.”

How to Build a Girl, is a hilariously funny and feminist tale full of teenage angst and 90s music references. A relatable tale of personal development that will make you feel heart-broken one moment and laughing in the next. A definite must-read for readers who enjoyed Moran’s first novel How to be a Woman and fans of the TV series Raised By Wolves, which features, Germaine who is in many ways similar to Johanna.

This is one of those books that caused a huge hype when it was released, but also one of those I wasn’t sure I fancied or not. In the end I saw it a few weeks ago in the charity shop and picked it up.

I‘ve been in a bit of a reading rut and finding it hard to get into anything but I have to say this was the perfect book to read myself out of a rut with.

As soon as I started reading I realised that Johanna Morrigan, the central character is the same age as me and I found myself laughing at her ‘life in the 90s through the eyes of a teenager’ wisdom. Johanna lives in a council house with her crazy dysfunctional family and this coming of age book is laugh out loud funny!

Sometimes, not often, but sometimes I read a book and find myself thinking ‘I wish I could write like this’, and this is one of those times. Moran’s dialogue is witty, touching and so very, very relatable. She captures life growing up as a girl perfectly, good bits and bad, making this an incredibly funny and touching novel.

Although Moran is clear that How to Build a Girl is a piece of fiction, it’s hard not to draw parallels with her own life, becoming a music journalist and growing up in Wolverhampton in a council house with a disabled, ex-musician father. How to Build a Girl must be at least semi-autobiographical but it’s so hilariously and cringingly honest in places I can see why any author would be happy to keep readers guessing as to which bits are true.