After a passionate evening of love-making, Steve’s girlfriend’s vagina starts making weird, eldritch noises. And when Stacey’s ghoulish gash gives birth to a full-sized human skeleton it becomes clear that she has a haunted hole. There’s only one thing for it. She persuades him to grab a torch, dive in and do some ghost-busting.

The improbably named and effusively mutton-chopped Carlton Mellick III seems to be a big name in “Bizzarro” fiction, a genre characterised by an extreme surrealism/absurdism. Mellick’s work is known for it’s hyper-sexual themes, gore and eye-catching titles.

It is a huge shame that works such as “Baby-Jesus ButtpIug”, “The Morbidly Obese Ninja”, “Razor Wire Pubic Hair” and “I Knocked Up Satan’s Daughter: A Demonic Romantic Comedy” are unlikely ever to find themselves on Richard and Judy’s Summer Reading List. 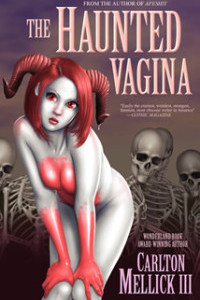 However, if this offering is anything to go by, Mr Mellick is being under-sold. OK, it’s not exactly the hautest of haute fiction, but there’s much more to this than is suggested by the trashy title. For a start, this novella is actually rather well written in a sparse, understated way.

True enough, there’s some extreme, explicit and very surreal sex but its neither pornographic nor gratuitous. Instead, The Haunted Vagina is an incongruously mature, intimate and rather poignant (albeit Cronenburgesque) love story. The characters are engagingly sweet and the story deals with some serious sexual themes.

Don’t be put off by the title. I wasn’t. It was the title (I’m a little ashamed to say) that sold it to me, but I certainly didn’t get what I was expecting.

‘”I also got you a sleeping bag and some food,” she says, “if you want to camp out over night.”

‘”I’m not camping out in your vagina overnight,” I tell her.’