“Red, White & Royal Blue is outrageously fun. It is romantic, sexy, witty, and thrilling. I loved every second.”

A sandy-haired blue-eyed Prince Charming from England. An intelligent Tex-Mex member of America’s First Family. They’ve known each other through tabloids and encounters on the international stage since their teens but things come to a head in a passionate kiss under the Kennedy lindens in the White House gardens. It sounds like stuff for a bodice ripper – the only problem is that they’re both of the same sex. Prince Henry and Alex both inhabit the public gaze in their respect countries – the Prince is in line to the throne of England and the adored Alex is the FSOTUS of the first woman President with his eyes on a future in politics. 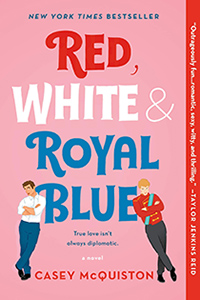 McQuiston’s concept is intriguing. What would happen if a romance like this actually took off? Would England’s Royal Family and the First Family of the United States survive it? The author is aware of what it means to be in the public gaze and how a breath of scandal has the potential to destroy a government, no matter how powerful. In Red, White & Royal Blue, the situation is especially tense since Ellen Clairmont is contesting second term elections for the Presidency. Anything can happen and it does in the twists and turns to stay off the media radar and evade family and bodyguards.

There are glitches in the shape of McQuiston’s knowledge of English royalty – references to Henry veer between addressing him as Prince of England and Prince of Wales, despite his having an older brother. Henry also refers to his University as ‘uni’, an Australian trait. On the American side there are no such flaws and the author stalks the White House and East Wing corridors of power with assurance, throwing in an exciting election countdown.

In the end the story is a triumph of spin doctoring and the quest for a more tolerant world – but the reader has to find out the rest!