“Well-written and thoroughly researched, Newman leaves no stone unturned in bringing to light women from history who have achieved amazing things.”

Cathy Newman’s Bloody Brilliant Women is a bloody brilliant book which recounts the history of Britain from the 1880s to modern day – filling in the gaps that most history books leave out, the women.

While the women in this book and their achievements range vastly, from fighting for our right to vote, to fixing a flaw in fighter planes, they all have one main thing in common, they were achieved brilliant things, despite the patriarchal system set up against women. 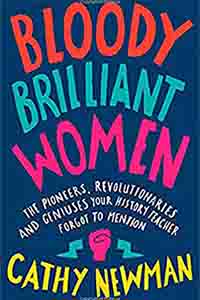 Well-written and thoroughly researched, Newman leaves no stone unturned in bringing to light women from history who have achieved amazing things, whether they are as well-known as the Emmeline Pankhurst and her daughters or whether they have gone almost completely unrecognised, like Rosalind Franklin whose colleagues received a Nobel Peace Prize for work on DNA which Franklin was a major part of.

Broken up into 7 main chapters, each makes up part of history with key milestones for women and Britain, including; World War One (the Great War) Women’s Suffrage, World War Two, the Miner’s Strikes, the inventions of the internet, and all the way up to Weinstein and the #MeToo campaign.

The book is jammed full detailed information which not only tells the tales of these amazing women but also some of the history surrounding them – some of which is hardly touched upon on the history syllabus at schools. Not only does Newman recount this history is an ordered and easy to follow way, she also links each woman together through their friendships, careers or other similar connections, which seamlessly moves the narrative on to the next wonderful woman in a way that flows well across the pages.

What’s more, Newman showcases some of these fantastic females in photographs near the centre of the book – the only thing which may have made this book better would have been to have these images interspersed throughout the book alongside the information about the people, however, this may also break up the flow of the text which may account for the editorial decision to group them together in two sets of photos and captions.

Inspiring, interesting and educational, if you want to fill the gaps in your history with the women who belong in them and even follow in their footsteps, then this is definitely the book for you. “So let’s raise a glass to strength, usefulness and not fading on the stalk – and the coming generations of bloody brilliant women.”