“A whimsical jaunt through Dublin and a modern take on many old Irish folktakes…Humorous, charming, and original.”

In 2018 Eggshells by Catriona Lally won The Rooney Prize; a prize for Irish writers under the age of 40, writing in Irish or English. I’m not familiar with the prize and have no idea of the shortlist but Eggshells would get my vote regardless.

Socially inept Vivian, who has an almost estranged sister also named Vivian (yep!), lives in the house of her late aunt. Her parents are both dead but not missed. She spends her days trying to do as little harm as possible and trying to be like other people. But she is not like other people; she is a changeling and frequently searches for the portal which will take her back to fairy land. Yet this is not a frivolous fairy tale and she, of course, not a changeling. 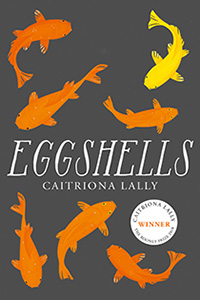 Who Vivian is, is someone who sees the world differently from the accepted norm and her observations and insight will make you see things from a different perspective, too; sometimes, a better perspective. She is obsessed with lists (butterfly names, plants, old cities, favourite food, conversation topics) and the visual aspect of speech. If her name is shortened, she prefers to “hear” VIV or viv, because it is symmetrical. Such quirks certainly made me think about words as more than a means of communication but an entity in their own right.

Vivian’s attempt at a dinner party, her attempts at conversation, her frequent bus journeys, befriending mice and one particular taxi ride had me questioning how we perceive those who do not conform and had me laughing, often out loud.

Eggshells is a quick, very entertaining and fairly easy read but it is also a complex comment on how difficult life can be for some and the ways they find to cope. It is funny, it is sad, it is rather brilliant.

And why doesn’t Penelope rhyme with antelope?