“This book exudes a feeling of home. The author takes you on a journey through her memories of Bengal life.”

Hilsa served steamed in neatly wrapped packets of banana leaf with a sauce of mustard paste, the melt in the mouth texture of notun gurer sandesh – Bengal food is at one level complex and at another very simple.

It has its roots deep in the simplicity of life in rural Bengal, an existence comprising fresh water fish, and whatever grows on the land, mustard, karela and a wealth of vegetables. To these ingredients were added those from Hiuen Tsang and the Chinese traders who swept up and down in their searches for religion and gold. 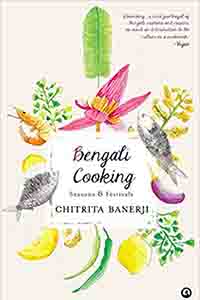 There was the added weight of the Muslim influence with the Mughuls who brought Persian and Afghan flavours to the melting pot and popularised the use of onions and garlic.  And of course the British, Dutch and Portuguese who added new world vegetables like potatoes, tomatoes and certain chillies to the Bengali menu while taking home, among other things, the curry.

Not that any of these influences really changed the Bengali’s main food focus, which were fish and vegetables.Chitrita Banerji covers Bengali food through the cycle of seasons and festivals linking the various flavours. Summer for example is the time for bitters while the monsoons rejoice in atap rice khichdi. Banerji throws in descriptions of floating down to her husband’s village home in Bangladesh over flooded roads with water reeds on either side. She also talks about the numerous festivals, each accompanied by its unique type of food ranging from humble water lily stems to creamy rice payesh.The result is an interplay of weather and traditions that showcases why Banerji is the food historian that she is. Culture and memories intertwine to create a unique narrative of a world that is fast vanishing. The text is interspersed with recipes which will be familiar to most Bengalis of a certain generation and which can be experimented with by those who have the inclination.

Today’s young people even in Calcutta will wander into the nearest Bengali restaurant simply because grandmother’s recipes are too complicated to be made at home by those who have no time to spare. As to seasonality of food, nowadays everything is available around the year so that concept too is passing away.

Kasundi that mustard cousin used to be made on Akshay Tritiya now it is found bottled on the shelves of the corner store round the year. Even the elusive date palm nolen gur is being captured in its essence, cutting out the impatient wait for a cold winter.Banerji, having lived in Bangladesh can compare the different cuisines and point out their nuances.  Her work is also well referenced using the ayurvedic Charak Samhita, Saratchandra Chatterjee’s accounts of a scorching summer and eighteenth century folklore. Anyone going through the book will be caught by the wealth of tradition and folk lore, and it makes for an ideal debating piece at dinner parties when the arguments about which cuisine is better, this side’s or that come into play.