“Both timely and chilling. Q is a thrilling read.”

Q (also known as Master Class) is the latest dystopian novel from Christina Dalcher, author of Vox. The book is set in a world in which perfection and intelligence is everything and these qualities are monitored through ‘Q Scores’. The main character, Elena Fairchild is a teacher in one of the silver (top) schools, she’s beautiful, clever and, of course, has a high ‘Q Score’ much like her husband Malcolm who also happens to be a government official with a great amount of power to yield. Their daughter Anne also has an outstanding ‘Q Score’, their youngest daughter Freddie, however, isn’t quite as gifted and when she fails her exam, she’s kicked out of the middle green school and shipped off on a yellow bus to a yellow, state boarding school. All Elena wants is to get her daughter back by any means and she soon concocts a plan she hopes will work. 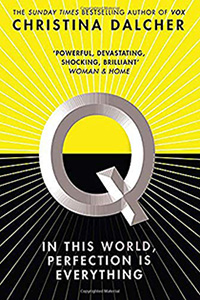 This terrifyingly possible novel by Christina Dalcher is a work of fiction, however, the themes and ideas highlighted in this work run parallel with the early movement of American Eugenics which strived to improve the genetic quality of the American population, and the later similar movements in Nazi Germany. Through stories told by Elena’s Oma, who grew up in Nazi Germany, and through Elena’s own journey to rescue her daughter, the reader soon learns more and more about the similarities in this fictional world to those of the American Eugenics Movement and Nazi Germany.

The parallels are portrayed by the author through the colour coded tier systems, immigration restrictions and the colour coded armbands used in the state schools which represent the classification systems used in Nazi Concentration Camps to show groups such as people from LGBTQIA+ community, specific religions such as Jews and Jehovah’s Witnesses, travellers, and other ‘non-conformists’. What’s more, as the story comes to its shocking conclusion, we see many characters excusing their grim actions with the simple idea that they were ‘just following instructions’ an idea that was often heard after World War Two.

This thought-provoking and chilling narrative also provides a necessary education for the reader in some of the horrific solutions that were previously used by the American Eugenics Program to try and improve the genetic quality including euthanasia and sterilisation. As the author points out in the notes at the end of the novel, this awful part of American history is so rarely talked about or taught in history classes, and while many American citizens may be aware of what went on in Nazi Germany, they may be unaware that this movement was actually inspired, in part, by what went on in America prior to World War Two.

What’s more, through this narrative, Christina Dalcher examines the influence of prejudice by showing the impact of prejudice-based bullying or distancing on groups such as those from poorer backgrounds, those from different religions or ethnic backgrounds and those whose academic intelligence doesn’t meet the criteria. Dalcher also highlights the often prejudice way society still sees women and single mothers by showing them in this narrative as being viewed as less competent parents, even if, like Elena, they would lay their life on the line for their children.

Christina Dalcher’s Q is a truly frightening dystopian novel which remains plausible enough with links to the current state of affairs where society is still judging people based on race, gender, sexuality, class, religion and many other factors, throughout to make it all the more terrifying. While it is slow to start as the author starts to embed the themes of American Eugenics and Nazi Germany into the mind of the reader, once the action properly begins the pace continues to climb until it meets its dark and horrifying climax.