Christopher Greyson - The Girl Who Lived

“The plot turns come fast and furious….exhilarating ending with a few surprises… Sharp characters enmeshed in a mystery that, particularly in its final lap, is a gleefully dizzy ride.”

This story revolves around Faith Winters, who is in a psychiatric hospital, suffering from severe post-traumatic stress disorder. 10 years ago, she and her sister, Kim, were en route to their parents’ cabin to celebrate Faith’s 13th birthday. As they approached the cabin, Faith sees RatFace sitting in a car. Little did she know that her world would turn upside down.

Kim, was murdered, and so was Mrs Fosters and her daughter Anna (Faith’s best friend), apparently by her dad, who was allegedly having an affair with Mrs Fosters, who then committed suicide. 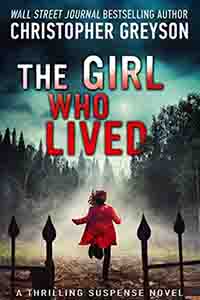 Faith saw Kim getting murdered – saw RatFace in the car and his accomplice with a baseball hat. She fled and managed to hide in the woods.

Ten years have passed, but Faith never fully recovered from the trauma she experienced that day. She still has nightmares. She has been in and out of rehab many-a-times. She tried to bury her anguish with alcohol, temper tantrums and suicidal tendencies which landed her in a psychiatric hospital. When she’s finally fit for release, close to the 10th anniversary of the murders, there’s just one condition – she has to return to her hometown and attend all “support group activities”, while on probation, of course, with no relapse.

However hard she tries, she’s unable to shake off the trauma of her past – nor her belief that her father could commit such a heinous crime. She’s convinced that RatFace was behind the murders, but no one believes her, given her unstable personality, except FBI agent Henryka Vasilyeva (aka Henry). Despite all limitations, she wants to seek justice for the victims, and to find the murderer.

Every morning she straps on a mask of bravery and prays that a stiff breeze wouldn’t blow it off and reveal to the world how terrible she felt.

Her mother is also a therapist, and she copes with her loss by writing about Faith – “The Girl Who Lived”. It becomes a best-seller and also puts Faith in an unnecessary limelight. She also remarries her ex-college flame, Thad, whom Faith has difficulty accepting.

Here, enter a myriad of characters, at times, who I found a tad difficult keeping a track of. From her support groups, to helpful cops, to Henry, to her camaraderie with people she met at the bar (yes, she relapses), to her counsellor, everyone eventually becomes a suspect. Because, she realises that she’s the one being hunted. But where is Henry when she’s needed the most?

This book, though started off slowly (and at times you would want to bang Faith’s head into a wall), was adequately paced. The twists and turns kept coming – and just when you thought you had hit the nail on the head, there would a turn which would prove you wrong. The ending was completely a stunner.

Fully recommended, despite a few hitches.