“It’s a good introduction to the Russian revolution and to the life and thinking of Lenin (and Russian communism and Marxism more generally).”

I read this aged tome, first published in 1947, because it had been lying around for far too long without being read! I’m glad I did.

Christopher Hill was a very eminent British historian, a particular specialist in the radicals of the English Civil War whose most famous book on the subject is probably The World Turned Upside Down.

Here though we’re doing communism! This is part of a Teach Yourself History series, but it’s hardly a Beginner’s Guide in modern terms and assumes a certain amount of knowledge of European political history and political theory. My creaky history qualifications were enough to get me through though. 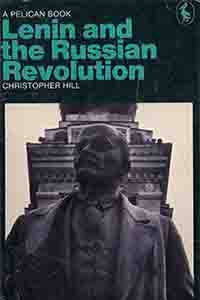 This is very readable, with a good narrative push through its three sections: “Before the Revolution”, “The Revolution”, “After the Revolution”. It’s a good introduction to the Russian revolution and to the life and thinking of Lenin (and Russian communism and Marxism more generally).

The only criticism I have is that it is too of its time and perhaps too of its author. In 1947, the Soviet Union had just helped win World War II, and that hangs heavy over this book. And Hill was a communist. There is almost no criticism of Lenin in this 240-ish page volume. I’m no world leader but I’m sure I’ve made five mistakes this morning, and probably a couple in this review. Lenin, while helping one of the world’s largest and most populous countries through cataclysmic change, made many fewer according to Hill. So, it loses a little credibility.