Christopher Paolini - The Fork the Witch and the Worm

“A wanderer and a cursed child. Spells and magic. And dragons, of course.”

Christopher Paolini is back with the world of Eragon after seven years. The title of The Fork, the Witch, and the Worm takes its cue from Tolkien and CS Lewis and will certainly have Paolini fans licking their chops. This new book is not a prequel or a sequel or any kind of spin off from the Eragon series but has its own definite standing, expanding on the fantasy world that Paolini began to create when he was just 19.

The book holds three new stories set in the magic world of Alagaësia from which the book takes its title. All three have girls at their heart. Eragon and his dragon Saphira are there to frame the stories, a year after setting out to train a whole new generation of Dragon Riders. 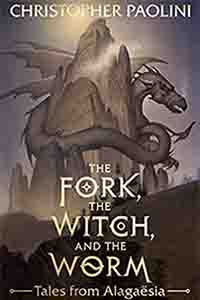 This has led to a whole clutch of tasks like guarding dragon’s eggs, dealing with snot nosed elves and wrangling with suppliers, somewhat more than he had originally bargained for. There’s a troubled little innkeeper’s daughter in The Fork who learns lessons of what is important and what is not from a mysterious traveller and acquires an unusual magic weapon.

There are also pages from Angela the Herbalist’s Memoir written by Paolini’s Sister Angela, who inspired the character in the story called The Witch which brings in another difficult little girl.  While The Worm gives us a story of the indomitable Illarva trying to slay the dragon Vermund who ravages the countryside in order to avenge her father’s death – this is the grittiest and goriest of the three and certain to give little girls a thrill.   Paolini fans will enjoy revisiting old haunts and children new to the book will find life lessons worth learning about the importance of home and facing troubles bravely told set against a fantasy scape.

It does of course help to have been a Paolini fan before embarking on this book because the characters do come from the Inheritance Cycle and sometimes it’s useful to know the back story which is constantly referred to.