Christy Lefteri - The Beekeeper of Aleppo

“A haunting and resonant story of Syrian war refugees undertaking a treacherous journey . . . Readers will find this deeply affecting for both its psychological intensity and emotional acuity.”

This heart wrenching story is the tale of two refugees, a husband and wife who need to leave Syria because of the civil war, and go to England where their friend Mustafa now resides after his escape from Syria.

Niru and Afra are a married couple. He is a beekeeper, she is an artist. They had a young son named Sami who was killed by a bomb during an attack, and since that incident Afra can no longer see. Afra does not want to leave the place where her only son died but when the forces of the government decide to force Uri to fight for their cause she finally agrees to leave. The rest of the book is about their efforts to reach Mustafa in England. 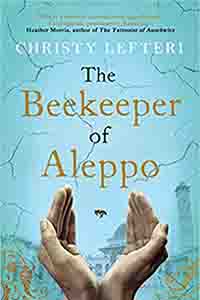 Their trip will be hard. It will be full of sadness and pain. They will meet kind and they will meet terrible people. Your heart will constantly beat with theirs as you go through their sufferings and their constant memories of their lost son.

But it is also a book of hope and love and what true love and faith can help you accomplish. Based on some true events described by the author in her Authors notes it is a must read.