“The more chapters I read, the more that ‘big picture’ emerged and the more hooked I became.”

For lovers of modern historical fiction, The Seven Lies is a provocative and absorbing expedition. American journalist C.J. Stroheim and Australian lawyer Emma are back, unravelling researched-based codes and puzzles to expose ‘the lies’ underlying defining contemporary US events. From the assassination of President Kennedy to September 11, and the subsequent wars in Afghanistan and Iraq, the author combines biography and analysis to uncover and then examine shocking secrets we were never meant to learn.

Much like Daniel Springfield’s first novel, his intent smacks you between the eyes from page one: A famous journalist is dead. At the time of reading, I thought: Is this character fictitious or are they real? I then asked: Is this book based on fantasy with a splattering of truths or is it really as well-researched as the publisher’s claim? Intrigued, I temporarily put the book down and did a little research of my own. Astonished to learn the journalist in question was indeed an actual person, I continued reading with gusto. 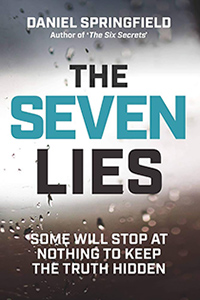 Jam-packed with credible evidences, I soon grasped that not every morsel of information needed dissection and clarification. A big picture was evolving and reiterated within the characters’ dialogue. I must confess, I loved Emma; beautiful, strong-willed, plucky, shrewd. Her legal insights and rational analogies of the investigations into John and Bobby Kennedy’s murders, as well as 9/11, were eye-opening and engrossing. C.J. was also likable; dashing, courageous, astute. His late father spent 34 years with the National Security Agency, retrospectively leaving a trail of clues and archival documents leading to ‘the seven lies’. Interestingly, some of those real documents are reproduced in the book.

The book’s cover has the teaser: ‘Some will stop at nothing to keep the truth hidden’. Expecting danger and intrigue was a given yet I learned in the preface that many of the issues the books’ characters experience, such as computer hacking and Internet monitoring, happened to the author. To me, this upped the credibility ante. The action components were cleverly integrated, thrilling and relatable, often leaving me with a nervous lump in my throat.
Lavish settings in exotic locations feature throughout, described truly by the author, although the meat of this story was always going to be the jaw-dropping revelations. In the first chapter C.J. and Emma uncover information inferring the events leading to 9/11 were linked to JFK’s assassination. They questioned: How can a president’s death in 1963 be connected to something which occurred in 2001? I admit I thought the same thing. The more chapters I read, the more that ‘big picture’ emerged and the more hooked I became.

So, did this book make me a believer? Am I a reborn Conspiracy Theorist? I might just be. I learned of crucial evidences concealed or destroyed, investigations contrived and farcical, and witnesses and whistle-blowers dying in dubious circumstances. Maybe the author was right: Some WILL stop at nothing to keep the truth hidden.

This novel should generate debate and even ruffle a few feathers. And so it ought to. Rarely is a “fiction” book this thought-provoking. The last chapter features a pertinent quote from John F. Kennedy: “The great enemy of the truth is very often not the lie, deliberate, contrived and dishonest, but the myth, persistent, persuasive and unrealistic.” Daniel Springfield asks us to question the tainted historical accounts. He then nudges us a little closer toward the truth.
I give The Seven Lies a full 5 stars; not necessarily for the penmanship but more the powerful content, the intricate research undertaken, the duteous attention to detail, and, of course, for revealing ‘the lies’.