“Gone are the days of rainbows, Lollipop Guilds and pretty much anything to sing about in a major key. For those willing to go on a quest with a heroine more attuned to our times than the Dust Bowl era, there’s no place like it.”

Welcome to the most backwards rendition of Oz yet, where bottomless rifts tear the once beautiful Oz apart and those who you thought were your heroes have gone Wicked.

Up is down. Down is up. Good is wicked. Wicked is good. And it’s brilliant.

There’s no other way to put it, Amy Gumm is commonly known as White Trash, trapped in Kansas, bullied and constantly torn between love and pity for her drug-addicted mother. 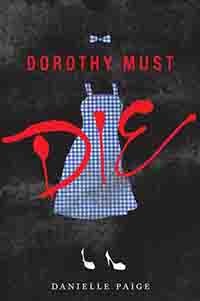 She had resigned herself to a life in nowhere with a bleak future and readily invited the incoming tornado, what was the worse that could happen? Her life already sucked.

The story plays out much like the original with Amy being flung not too gracefully around her metal trailer as she is taken up by the storm.

Landing relatively unharmed smack bang in the middle of Oz, she is saved from an untimely death by a charming stranger who quickly disappears. Amy is left with a number of conflicting thoughts and feelings before reluctantly deciding its in her best interest to follow the glorified yellow brick road. (It’s better than being devoured by man-eating corn stalks, and yes that’s a thing).

We see some familiar sights along the journey but each one has its own flair of wickedness. We meet the spirited and bad tempered goth munchkin Indigo who quickly staves Amy away from Glinda, the supposed good witch turned psycho, who floats ominously over a group of munchkins forced to magic mine whilst wearing an extremely creepy grin across her face. Perma-smile being the latest in high Emerald city fashion.

We discover that the flying monkeys, being susceptible to magic have split into two groups. Those who serve Dorothy and pull her chariot and the Wingless ones. I’m sure I don’t have to go into detail about the latter group.

It becomes painfully obvious that Oz is a twisted hell hole.

As the saying goes, the power and allure of Oz has gone straight to the bratty girls head and with a little magic involved, she has gone bat shit crazy.

Torturing people for too much sass and removing eyes for those who dare to gaze at her for a second longer than they should, are just the tip of the iceberg. If it affects Her Majesty’s happiness, expect to die, or worse.

Dorothy’s cruel mind is sickening and I began to seriously love her for her flaws. She is a grand villain and I can’t wait to see how far Danielle Page is willing to push it.

Oz itself is hauntingly beautiful, Page has spared no expense in revealing all the grandeur of this fantasy world in each scene flawlessly whilst unveiling the nightmares creeping underneath the illusion.

The Tin woodman is a mess of metal and blades for teeth, followed by his Tin Army, half Ozians, usually injured or tortured remnants of Dorothy’s games thrown away like rag-dolls to the experimental expertise of the Scarecrow.

The Lion roams the land with his band of rabid animals, destroying villages, killing innocents and draining people of their fear to make himself more powerful.

Despite the dark and twisted theme of the book, it’s not all doom and gloom. The characters are angry, and with good reason. Many have been killed, tortured enslaved or lost their friends and families to Dorothy and her band of miscreants. Heck even the trees can’t talk, because it “ruined the apple-eating experience”. Go figure.

But, there is still hope. Those who have escaped suppression have formed their own rebel groups and move against Dorothy, most notable of ‘witch'(hehe, get it?) being The Revolutionary Order of the Wicked.

Despite everything being connected to Dorothy, we don’t fully understand the level of her insanity until later in the book. We see a ‘grown-up’ version of Dorothy, a skinny bitch coated in blue chiffon and lots and lots of cleavage to match her contorted mind.

Amy is surprisingly relate-able and realistic, displaying a version of childhood that all too many have experienced. She is heroic when she has to be but doesn’t hesitate to acknowledge when she’s being a complete idiot. She’s stubborn and mouthy and a little bit of a jerk at times but she knows right from wrong.

Having been recruited by the Revolutionary Order of the Wicked(wicked witches supposedly turned good, for the moment), she trains hard and works to control her magic unlike other protagonists who’s powers/skills are handed to them on a silver platter.

Throw in a charming young Wizard called Nox, two cocky tin army escapees and a few granny-smith style witches and you have the Goonies: Oz style. Page slightly downplays the connection between Amy and Nox, though it is obvious that he only exists to be a potential love interest but it isn’t a main feature of the plot, the plot takes priority and I think some authors should take note! Stories aren’t all love and fairy tales.

Overall, this book left me feeling very nostalgic, and I’ve got the original Wizard of Oz on my shelf to read before I die(I have a lot of books on that shelf).

I’m highly anticipating the sequel as it’s clear this book was a huge set-up for the final showdown, and left a lot of questions unanswered in the last chapters of the books. I only hope there is a lot more action as the perma-smile hits the fan and Dorothy’s shoes are given a new coat of red, if you know what I mean.