“Splendid… a riveting crime drama in a throwback journalistic world, a time when you could yell for a copy boy to bring you Dixie cups for your illegal liquor.”

A novel set in Chicago during the era of Al Capone. Mainly know for his Pulitzer Prize winning play or his Oscar nominated screenplays, the author has written his first novel in 20 years.

The story is about Mike Hodge, a hard hitting newspaper reporter who served in WW1 so he has no shortage of courage. He and his friend Pawler cover the main stories in Chicago, and when a minor Jewish monster gets rubbed out seemingly for no reason, he gets interested. He decides to start by writing a story about the flower shops of Chicago who do a very brisk business whenever their is a mob funeral. 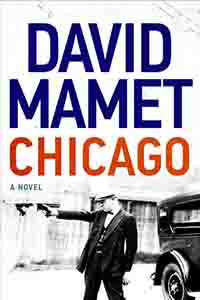 During his investigation he meets Annie Walsh, a beautiful young Irish girl who works at the shop. And he falls in love. When she is shot down right in front of his own eyes he initially blames himself for her death. But Mike is too nosy as a reporter and so he begins looking into her death. This will unlock the main plot in the story.

Mamet’s writing consists of heavy dialogue, and you must pay strict attention as his writing style is similar to his plays, I.e. Glengarry Glen Ross. The dialogue is quick and tends to run in circles until getting around to the main point so it can be easy for you to drift away for a second or two. Their was a few times I had to reread a paragraph or two to see what I had missed. But he is a master storyteller, and justice will finally be served. It might be a tough read for some, but it is certainly worth the ride. After all, he is a Pulitzer Winner.