“Few writers can tug at a reader’s heartstrings like David Nicholls, and on this occasion he comes close to snapping a couple . . . A charming, evocative and searingly beautiful tale.”

Actor turned writer David Nicholls has made a name for himself in recent years with novels like One Day and Us. In his latest novel, Sweet Sorrow, Nicholls takes us back in time to the ’90s to experience the first love of a troubled young teenager who is struggling to process his parent’s separation, as well as leaving school, and his feelings towards a girl he meets when he gets roped into performing in a production of Romeo and Juliet. 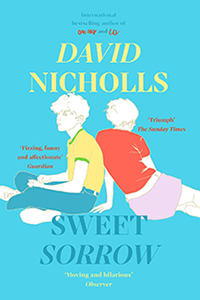 Our protagonist, Charlie Lewis, recalls the story as a man in his late 30s, who is reminded of the fateful summer that has stuck with him decades later. The novel begins on the last day of Charlie’s final day at school, having just finished his GCSEs. From here he begins his summer holidays, a long, hot stretch of time that, as teenagers, we all felt lasted a lifetime. Already pessimistic about his upcoming exam results, Charlie’s world is tipped upside down when his parents reveal they’re separating. To make matters worse, Charlie’s sister goes to live with their mother and her new boyfriend, while Charlie is forced to remain with his deeply depressed father, who turns to alcohol to deal with the loss of his wife and his bankrupt business.

Aiming to stay clear of his depressing home life, Charlie takes to spending long summer days out on his bike and reading under the shade of trees, until one day he bumps into Fran Fisher, a young girl Charlie immediately feels a connection to. Eager to see more of her, Charlie reluctantly joins an ammeter production of Shakespeare’s Romeo & Juliet, where he is cast in the role of Benvolio. With enough problems of his own, Charlie is eager to quit the play the moment he gets Fran’s number, but the summer soon begins to unfold in a way he could never imagine, in a way that will have him reminiscing on it decades later.

The name ‘Sweet Sorrow’ may appear to some as a slightly overly intense name for a book about young love, especially given that it is taken from Romeo & Juliet, but the novel earns this name, exploring how revisiting the highs and lows of the past is a truly bittersweet experience. After all, the word nostalgia comes from the Greek words nóstos, meaning homecoming and álgos, meaning pain. Charlie’s fateful summer brings him some of his highest highs as well as his lowest lows, and he’ll never be the same once it’s over.

Novels about teenage romance are a dime a dozen, but Sweet Sorrow pulls away from the overcrowded genre with its authentic look at the trials and tribulations that come with one’s teenage years, as well as first love. Readers will find themselves being reminded of their own forays into young adulthood and Nicholls does an excellent job in recreating that long summer many of us spent, no longer in school, but not yet out in the real world. It’s a strange time to be alive, no longer a child, but not yet an adult. Nervous and unsure of our place in the world, all the while raging with hormones but feeling self-conscious. For some reason, much of pop culture depicts teenage years as being full of sex, drugs, and parties, but the reality is a much more uncertain, humdrum affair occasionally punctuated by intensely exciting moments that, for better or worse, shape us into the adults we become.

Not only does Nicholls paint an excellent and accurate picture of first love, but also realises an extremely accurate recreation of the uncertainty we feel as young adults. I was struck by how well Nicholls manages to sprinkle sentimentality throughout the book, without making it feel overly indulgent. Each character feels like a real person and many of us knew our own versions of them when we were growing up, from the insults and banter we shared with our best friends, to the intense longing we felt for the first person we fell for.

As previously stated, coming of age novels is one of fiction’s most popular genres, meaning the quality can vary wildly, but Sweet Sorrow is well above many of its peers. It may not be quite as revolutionary as, say, The Catcher in the Rye or Little Women, though it’s certainly a worthy read for those who have read the classics and want something more modern. While the two books are different in many ways, I found myself detecting notes of Haruki Murakami’s coming-of-age classic Norwegian Wood. If you’re feeling in the mood for a nostalgic trip down memory lane, then Sweet Sorrow is one you should add to your bookshelf. Bonus points if you read it in the Summer.