Eowyn Ivey - To the Bright Edge of the World

“Entrancing… In this splendid adventure novel, Ivey captures Alaska’s beauty and brutality, not just preserving history, but keeping it alive.”

Eowyn Ivey’s newest novel, released today, is set in her home state, Alaska. A historical fiction set in 1885, It follows the adventures of Lieutant Colonel Allen Forrester and his expedition through uncharted territory.

The book is told through diary entries (for both Allen and his wife Sophie), letters, field observations, photos and even extracts from other books and expedition reports. It is clear from this compellation of writing that the author is well acquainted with the area and has put a lot of research into this book. 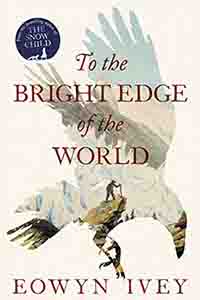 It all begins with a letter from a relative of Forrester’s, to a museum curator (Joshua Sloan) regarding artefacts from Forrester’s expedition, this consequently sparks a correspondence between the two regarding Forrester’s trip, invoking interesting reactions from Mr Sloan as he reads the diaries alongside the reader.

This beautifully written novel perfectly describes the harsh but stunning Alaskan landscape. Forrester and his men make their way up the Wolverine River, encountering strange occurrences and unique people along the way. Many interesting characters can be found in the Native American (Indian) tribes including mystical humans that appear to step back and forth over the line between man and beast. One such character that seems to do this is an old Indian man unclaimed by any tribe, who reappears in odd situations and holds many similar traits with a raven seen by many people, including Forrester’s wife Sophie.

While Allen explores this enchanting and captivating land, his wife Sophie encounters her own struggles and interesting life twists waiting back at the Vancouver barracks for her husband to return. Having become enamoured with photography after watching one of Allen’s men (Pruitt) practise with his camera before the expedition, Sophie takes up photography of nature, particularly birds. She searches for the perfect composition with a specific, surreal and sublime light that will result in the image she strives to create.

A story full of history, adventure, mystery and different cultures, the novel is brilliantly interwoven together to make a flowing and enthralling read. The fast pace owed to the short passages which chop and change from letters to diaries etc. also adds to the ease of the read and its gripping nature.

The stunning landscape described through the eyes of Forrester and his men truly makes for a bewitching and magical story.

Although the storyline is very different to her previous novel, The Snow Child, the author still carries the folk tale style within the main plot and magical backdrop that comes from the Alaskan setting.