“The Starless Sea rejects older stories: it makes its own. Its magic is based in the New York Public Library, in glittering hotels, and the beautiful blatant kitsch of a professional fortune teller’s house. Rather than a traditional fantasy novel, this is an artificial myth in its own right, soldered together from the girders of skyscrapers… the novel’s scope and ambition are undeniable.”

The Starless Sea by Erin Morgenstern. This is an epic fantasy about a young man named Zachary Ezra Rawlins who on a trip to a library discovers a book called Sweet Sorrows.  It’s ia book of long ago tales of pirates, devils and all else, and while browsing through the book finds a story that took place during his own youth.

Thus begins the adventure back and forth between buildings with rooms that upon entering send you back and forth in time.  He will also meet Mirabel and Dorian who will help him on his way   He will find hurt and adventure and love on his travels of almost 500 pages until reaching his final
destination. 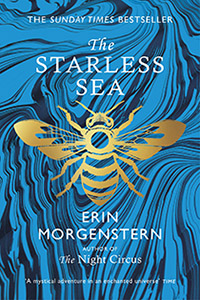 While to me not as enjoyable as her previous book The Night Circus it is still worthy of reading.  On this one you really need to pay attention and it took me awhile to get used to the rhythm of the book, but still it is a strong effort.