Lessons on Poise and Dis(grace) from the World of Drag

“Serving Face is the clarion call of the crowd in the queer space. Serving Face is a slap to the heteronormative visage of society. It is a declaration of existence and of validity in a world that would silence your voice.” – Divina De Campo

Serving Face: Lessons on Poise and (Dis)grace from the World of Drag is a book by drag artist and comedian, Felix Le Freak, with an additional foreword by Divina De Campo, whom many will know from RuPaul’s Drag Race UK Season One. The addition published in the U.S. features an alternative foreword by Monet Xchange, RuPaul’s Drag Race Season Ten competitor and All Stars Four winner. 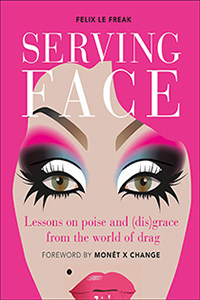 The book is written in an interview style with its large collection of profile pieces from a range of people working and living in the drag world, including; drag queens, drag kings, drag artists and performers. The book is broken up into sections with various styles of drag and Felix has included a wide variety of people from camp old-school queens like Coco Peru to punk rebels like Chiyo.

While Serving Face does include profile pieces with drag queens and performers who have appeared on the Drag Race franchise – including; Tynomi Banks, Crystal, Sum Ting Wong, Yuhua Hamasaki, and most recently Art Simone – the book’s focus is not on the ‘mainstream’ drag but on the diversity of the art form. This book explores drag from a whole variety of different areas including those from the ballroom community, Klub Kids, trans and non-binary artists and performers and AFAB queens.

Each chapter sees Felix discussing drag with one of the twenty people included in the book in profiles that read like friendly, accessible conversations. Every profile piece is also complemented by colourful photos of the person’s drag.

In each interview, the reader can learn about how the person got into drag, what the art form means to them, as well as additional information about their personal style, life and journey. What’s more, this book also successfully subverts many of the myths placed onto drag by mainstream media such as ‘women can’t be drag queens’ and the notion that drag kings always perpetuate toxic masculinity.

Felix Le Freak’s Serving Face is colourful book which celebrates the non-conforming, queer joy of drag and the community as a whole. It is the perfect book for anyone who loves the art form of drag and/or wishes to learn more about the diversity within it.