G.W. Dahlquist - The Glass Books of the Dream Eaters

Miss Temple – a spunky heroine with a perfectly charming pair of green ankle boots and a great curiosity to discover why her fiance has thrown her over.

Cardinal Chang – neither religious nor oriental, but he’ll send you to your god for the price of a cup of chocolate.

At nearly 800 pages, this is a true leviathan of a novel, and it’s the first of three. There is a tortuous, meandering plot which has barely revealed itself by the end of the first third of the book, salted with liberal flashbacks and changes of point of view, all couched in a densely verbose and frequently redundant prose. 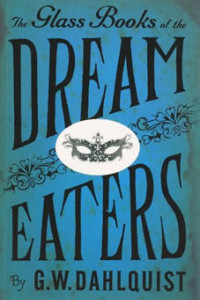 Worse still is the host of secondary characters, many of whom are either not named when they are first met or not revealed when they are first named. This is a difficult read, requiring some considerable concentration and I found myself having to skip back and re-read several pages or even chapters to try and remind myself of who’s who, who’s doing what to who and why. But then, it IS gothic; there is nothing spare or cut down about this story.

Nevertheless it is certainly a compelling and, yes, enjoyable book – if you persist. After the first cycle of three chapters, the plot DOES begin to reveal and what appeared to be an impenetrable mystery DOES become much clearer. The tempo picks up and the excitement builds. The characters are interesting and engaging. Miss Temple comes into her own as an indomitable, and tiny, whirlwind of straight(ish)-laced womanhood in “her” second chapter as she marshalls her forces against the sinister cabal. The good Kapitan Doktor Svenson is revealed as a (reluctant) man of action and Cardinal Chang shows his honourable nature. The story is thrilling and genuinely unpudownable; imagine (as the blurb suggests) a good Sherlock Holmes mystery, writ large and with the added spice of a bit of erotic naughtiness to tantalise the reader into turning the next page. This latter element is well billed in the blurb, but don’t go expecting to much. Don’t go (as did I!) flicking forward to find the rude bits because they are few and far between and not as naughty as you might expect.

Not a book for reading while waiting for a train (or waiting for the train to reach your station) – you may or may not miss your stop but you will certainly lose the thread. Give the book the attention it deserves – a quite evening in front of a roaring fire, or tucked under your duvet – and it will repay you with many lost hours avoiding (or stalking) the Comte d’Orcancz’s henchmen over the city’s rooftops, frequenting bordellos and coffee houses and dodging bullets or rapiers. There are escapes and frenzied pursuits aplenty, steam-trains and even an airship. Five, well earned stars and I will certainly be reading the next two – The Dark Volume and The Chemickal Marriage.

“Do you know,” continued Miss Temple, “I have always meant to inquire as to your brand of pomade, for I have always found your hair to be so very… /managed/. And slick – managed /and/ slick. I have wanted to impart such grooming to any number of other men in the city, but have not known what to recommend – and always forgot to ask!”
“It is Bronson’s, Miss.”
“/Bronson’s/. Excellent.” She leaned in with a suddenly serious expression. “Do you never worry about fire?”
“Fire?”
“Leaning too close to a candle? I should think – you know – /whoosh!/” She chuckled. “Ah, it is so pleasant to laugh. But I /am/ in earnest, Mr Spanning.”