“A profound, poetic, post-holocaust novel of immense stature: so special I wanted mine to be the only copy.”

Last night I finished this my all-time favourite book for the third time; at least now I have a paperback copy of it, one that I shall ensure I keep too.

As far as I know, it is not available on Kindle, sorry, I just looked, it is available at £5.99 – what-ever … My copy came from Astley Book Farm as a second hand copy at £2.75, and it looks as though it actually looks brand new to me. 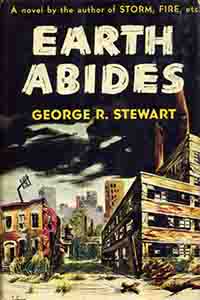 So why is it my all-time favourite read then? I first read it in the 1970s as part of the Corgi Sci-Fi Classics range. At that time, I knew nothing of dystopia stories at all.  So, this one is the very first such novel I have read. It begins with a young post grad geography student doing research on an area not far from San Francisco. There he is, climbing a rock face, when there’s a distinctive rattle followed quickly by a small bite on his hand. The surprised of it makes him lose his grip and he falls to the bottom again, without further injury, lucky for him. Where he lands, he finds a hammer, which comes to play an important part in the story later. He finally gets to his car and drives to the cabin he’s living in while out in the field. Slowly he falls ill and he expects to die. What he doesn’t know is that he is also suffering from a mysterious measles-like illness and for days his body fights off the effect of both.

Eventually, he becomes well again and sets off back to city, calling in at a couple of places on the way, and finds them deserted. It’s the same story when arrives back in the city, even his parents have disappeared. He, no, Ish as he is called, sets out to roam the city as much as he can and becomes even more lonely when he realises that Frisco is the same, empty and quiet. Booze shops have been looted along with some jewellery shops, but no sign of human life. Next, he heads off to drive to  the east coast where he finds the odd one or two people still alive, ‘odd’ being the operative word here. Even so he finds no-one he feels unable to settle with, even in New York. Depressed he sets off back home.

One morning he sees smoke rising from the centre of the city and goes off looking for it. There he finds a woman, and the rest of the story follows as the small community they found grows in number and strength. There are problems and people die, yet more are born than die. Ish seems happy to some extent but he wonders who take over as the leader when he has gone. Thinking about each of the Tribe as they call themselves, he writes all off when it comes to intelligence. I hadn’t noticed this before but this time of reading it did hit home hard that Ish was being very judgemental; but there again, he was looking for another leader. Earth Abides is a book of its time, first published in 1949, so what do I expect?

My ever ready note book was to hand when I needed it and one small passage struck me as interesting; on p283 Ish has been devastated that his one hope as his successor dies of illness introduced by a stranger. He’s sitting on the steps outside the university library mourning his loss, when he thinks about all the books in the building behind him, 1 million plus books, he thinks … What would be the use of them now? Why worry about them?  Why worry about the millions of them? There was no one left, now, to carry on. Books themselves, mere wood-pulp and lamp-black, were nothing – without a mind to use them. Ish was an old man at that time, but soon enough he becomes even older and thinks back on his life.

He now is being cared for by just one man, who feeds and helps him. He is the last American. Years later he is no more, yet before he leaves he sees that at two of the items he ‘invented’ were still in use. He is happy …