“The Double follows the story of Spero Lucas”

As soon as I start reading another George Pelecanos novel I remember what I don’t like about his writing. Then, 150 pages later, after staying up much later than I meant to, I forget that and remember what I love about his books.

Pelecanos even sets his stylistic stall our here. Describing some books his hero is leaving at a hospital, he writes: “…like most people, the recovering veterans enjoyed a good story told with clean, efficient writing, a plot involving a problem to be solved or surmounted, and everyday characters the reader could relate to.”

It’s almost a manifestor, and that’s exactly what you get. My reservations about Pelecanos are about that “efficiency”. Sometimes it’s just too damned efficient. The lists of brand names, the police-like descriptions of characters, places and even action, the quick psychological sketches. It can feel a bit cold and lacking in life. 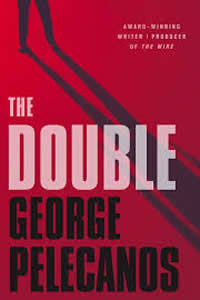 On plotting and pace though, Pelecanos can’t be faulted. I raced through this. Yes, after a while you kind of know where this story is heading, but you still want to get there.

The Double is the second of Pelecanos’ novels to star Spero Lucas. Lucas is a Washington DC private investigator, a former marine who fought in the Second Gulf War after growing up adopted in a racially mixed family in DC. Interestingly, I checked out a couple of reviews before writing this and have found Spero referred to as both black and white. I couldn’t tell you, and I think that may be Pelecanos’ intention.

Here, he is engaged by a defence attorney to help out on a murder case. He’s also on the trail of a stolen painting for a client, and has half an eye on the unsolved murder of a student at the school where his brother Leo, who is identified as black, teaches. A developing romance with a married woman occupies much of the rest of his time.

Lucas is modern, iPhone more often in hand than gun, very physical, and a bit of an enigma. You feel he’s got room to develop in subsequent books – he surely has demons, but they’re relatively quiet for now. He works out, cycles and kayaks, drinks in moderation, smokes a bit of weed, and loves movies and music. (These last two can sometimes feel like a vehicle for showing off the author’s own good taste – I’ve yet to find a crime writer, from Ellroy to Rankin, who’s able to avoid this minor trap.) Like all good PIs, he’s perfectly capable of operating on the wrong side of the law, and very capable indeed of handling himself when he crosses that line.

Washington DC (Pelecanos’ beloved home town), the treatment of veterans, the US justice system, race, sexual politics, the meaning of family life and addiction all get a look in along the way. And it’s all very efficiently done – in both the good and bad sense.

I’d certainly recommend The Double. I’ll certainly look out for the next in the series and I want to go back and read and re-read some more of Pelecanos’ work to see if I can find himself letting go a little.