A Song of Ice and Fire, book 1

“Colossal, staggering… Martin captures all the intoxicating complexity of the Wars of the Roses or Imperial Rome in his imaginary world … one of the greats of fantasy literature”

In the kingdom of Westeros, King Robert Baratheon has taken the throne by force from Mad King Aerys II. Robert’s wife, Cersei is a Lannister – devious and power hungry, she plots to oust the King and supplant him with her son Joffrey (begat from an incestuous relationship with her brother Jaime).

The King travels to Winterfell to enlist the help of his old friend Ned Stark, while in the far North, the Night’s Watch do battle against the barbarians (and worse) of the cold wastes. 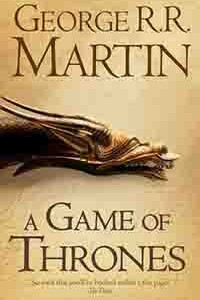 Across the narrow seas to the East, the twins Viserys and Danerys, the last surviving son and daughter of the mad king, form an alliance with the Dothraki, a tribe of barbaric horse-mounted warriors, intending to wrest power from the usurper.

There you go. You don’t need to read it now.

George R. R. Martin’s enormous epic (this is the first of – so far – 5 books, with two more to come) makes Tolkein’s masterwork look a bit like “a long story with some elves in it”. Admittedly, Martin has eschewed elves (although he has given us dragons and zombies) but he has certainly engineered an enormous world with a breadth and depth to rival Middle-Earth. His canvas is painted with great richness and detail; broad sweeping grasslands, icy forests and chill tundra, arid desert and humid Mediterranean cities, all supported by an equally well engineered, Tolkeinesque historical back-story.

Indeed the plot and dramatis personae are breathtakingly hard to follow to begin with. Imagine “Dallas”, done with plate armour and more killing, and recounted from the point of view of some ten of the major characters and with big-picture events unfolding concurrently in maybe four or five different locations. Keeping track of what is going on and who is doing it can be a bit of a struggle and I dropped the book after the first few chapters, my poor head swimming. Happily I subsequently found that, having watched the HBO series, I was much better equipped to read the book, having a better feel for the plot structure and the identity and motives of the bewilderingly large cast. Watching and reading (or vice versa) may be considered a cheat by some and it does rather spoil the surprise, but if you struggle as I did, it is a highly recommended strategy.

Apart from all that, the book is well written. Martin is a very competent story-teller – his prose and dialogue read well and, with a little help from HBO, the plot is absorbing, exciting and suspenseful. I must admit, however, to experiencing a degree of fatigue by about the half to two-thirds way mark. It’s not that nothing is happening… quite the opposite. The book is nearly 900 pages long and a degree of exhaustion is to be expected – I do wonder whether I will have the stamina to complete the full series…

Nevertheless this is a sumptuous, breathtaking, absorbing and fascinating epic of a story, requiring much more from its readers than a couple of pages a day between work, dinner and bed. Well worth a go to any hard-boiled fantasy fan.

(It’s worth pointing out that all that bonking that in the TV series didn’t come from the books. At least not the first one. The book is a good deal more suitable for younger readers than the TV series.)