George and Weedon Grossmith - The Diary of a Nobody

“Pooter himself is as gentle as you could wish, a wonderful character, genuinely lovable. The book is beautifully constructed.”

This is a book that came out over a century ago, written by two brothers George and Weedon Grossmith. It came out as a spoof, poking fun at the plethora of diaries and memoirs that were popular at the time, rather in the same way blogs lend themselves to satire now. The Diary of a Nobody is a product of its time, the memoir of Mr Pooter, a clerk, who lives with his wife Carrie in a six room house in Holloway. The Pooters have a maid Sarah and various other household helps who come and go. They also have a son Willie who loses his job at the bank because he sleeps late and is irregular in attendance. 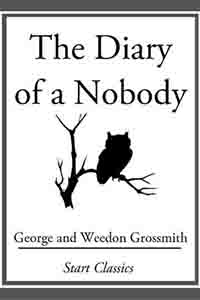 Waugh called this the funniest book in the world. At the time when it was written it may have been – now it has about the charm of long forgotten things. In England the way of life that it represents had vanished. There are no more clerks labouring in offices over piled files. In India and certainly in Bengal, it has an air of familiarity. There are many middle class married Bengalis with  servants and  drop out sons who strive to seem better than they are, conducting life with pomposity and self-importance. Life for them is comprised of little pleasures and social embarrassments – the result of wanting to seem better placed in the social hierarchy than they are.

Interestingly the book inspired many of the diary genres that followed including Sue Townsend’s Adrian Mole and ‘Pooterish’ is a word in the OED – at least it remains a word until replaced by some newly trending one.

Ruskin Bond is behind this reprint in India and with good reason. There is an audience here who will respond to the aspirations of Mr Pooter which remain at a muted pitch of hilarity – though the world of the writers of the East India Company is long gone.