“A real page-turner, the kind of warmth and magical storytelling that puts me in mind of the late, great Maeve Binchy… a writer of real strength and talent.”

Home Stretch was my first experience with Graham Norton’s fiction, and I thoroughly enjoyed it- clearly I have been missing out. Norton looks at small town life in Ireland in the 1980s and takes his characters through a period of huge social change to the current day. At the heart of the story is the damage caused by secrecy and stigma, and Norton’s characters are so vivid and believable that it is impossible not to empathize with them.
The book opens in 1987 with the news that there has been a terrible car accident involving a group of local young people on their way home from a day at the beach. Three of them died and the three that survive are scarred, physically, psychologically and emotionally. The ramifications of that day will echo through the town for decades to come. One family has lost one daughter, the other lies in a coma fighting for her life despite paralyzing injuries. Another woman buries her only son on the eve of his wedding , his wife to be also killed in the accident. Then there is the driver of the car, son of the local publican who sinks into a depression and at times wishes he did not survive. The only way for him to move on is to leave , first for the building sites in Liverpool , then London and eventually New York where he finally feels comfortable enough to leave the past behind and build a new life for himself. Decades later his old and new worlds collide when a chance encounter leads to a reunion with his estranged family , and a chance to face up to the day it all began and the secrets he has been hiding for years. 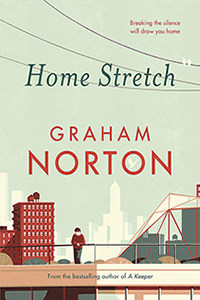 Connor is a truly wonderful character to hinge the book on, his story is tragic but ultimately hopeful and his journey and experiences mirror those of so many Irish immigrants of those days though his reasons for leaving were more dramatic than most. His journey also shows the huge change in society’s attitude to homosexuality in Ireland, from the secrecy, stigma and shame of the 80’s to the acceptance of today. Aside from Connor, Norton also does a wonderful job with Ellen, Connor’s sister who stays at home and eventually ends up marrying another survivor of the accident. Her story also has secrets and lies and I found her struggles heart wrenching at times. His depiction of small town life is simply wonderful – from the claustrophobia of everyone knowing one another’s business to the way people pull together in the face of tragedy , he captured the experience perfectly.
Overall and absorbing and compelling story of loss, deception and ultimately acceptance and one that I highly recommend.
I read an ARC courtesy of NetGalley and the publisher, all opinions are my own.