“Not only are their plot lines really dark at times, a lot of the action within their stories darken the plot as it progresses to the end.”

As a reader, I have often wondered about the type of minds that some writers must have. Not only are their plot lines really dark at times, a lot of the action within their stories darken the plot as it progresses to the end. As a writer myself, well, some of mine are more than a little dark!

Graham Smith is another new writer for me. In this novel he has thirty-year veteran cop being forced into retirement. With no other choice he decides he will go out with a bang. 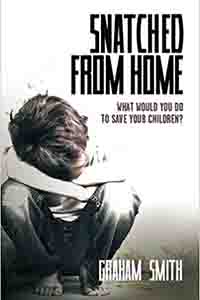 DI Harry Evans is a course, old style copper who has the highest arrest record within Cumbria Constabulary; he also has the highest number of complaints raised against him. He is a dinosaur copper in a world that has moved on while he stands still. In his last week, he is tasked to show around his replacement, a DI who has moved down from Glasgow. By the book DI John Campbell is amazed at just many people Evens knows within the county, on both sides of the law. Evens has three major cases on the go, a series of farm thefts involving the loss of machinery, a spat of thefts from pubs that look like inside jobs, and finally a series of cons where people are buying cars at an agreed price but when the sellers count the cash after, it’s always short of the agreed price. They are unaware of a fourth case, one that will give Evens his big bang, if he can solve it in time. This one last case that taxes them to the full.

Did I enjoy this one? Well, yes, I did; if I finish a book it’s an indication of if I like it or not. My TBR pile is far too tall to waste time on a book I am not enjoying! The writing flows easy enough, even with the occasional typo found. That’s not good I suppose but I’ve found them in titles from some of the top writers too.

The next question is, will I be reading more of Smith’s books? The answer is yes, but I won’t go out of my way to find them!