“Every Bitter Thing is a very readable, intense, and compelling addition to the literature of difficult, harrowing childhoods. The story feels very real . . . it will affect you deeply.“

Hardy Jones’ book, Every Bitter Thing reveals a side to childhood abuse not often covered and often over-looked, the boy’s side. It is a common misconception that only girls suffer from abuse and that it is always a family member. Jones’s book proves these two misconceptions false.

The story begins with the author giving the reader a picture of an overbearing and at times verbally and physically abusive father. Subtly, through the scenes with the father a light is shed on an unexpected victimizer.

This story comes out during a time in the literary world that memoirs are being revealed as literary gems and establishing itself in the publishing world. Hardy Jones reveals this other side of abuse with humor and candor and realism. 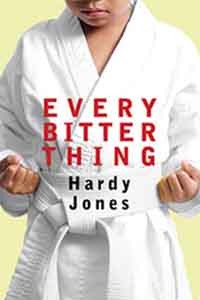 “Dad’s hands were thick, wide pallets, and his forearms rippled even when relaxed. He stood just under six feet and had a graying receding hair line. A backhand caught my eye. ‘You said you’d start hitting me tomorrow.’ ‘You can’t always believe what people say…’” Though the relationship between the son and father was a rough one, the love the father has for his son shines through in the end.

Every Bitter Thing was an enjoyable read despite the difficult subject matter. The target audience is young adolescent boys and the cover design subtly lures them into the story and the empathy they form for young Wesley will help them through the difficult parts and in turn reach a young boy who might be fighting his own battles and lend him a helping hand in finding his own voice.