“A treat . . . Murakami captures the heartbeat of his generation and draws the reader in so completely you mourn when the story is done.”

Haruki Murakami is arguably one of the finest writers Japan has ever produced and, even if you’re not familiar with his name, you’ve no doubt heard of his works such as IQ84, Kafka on the Shore, and Norwegian Wood.

A nostalgic story set in the 1960’s, the novel begins when a middle-aged Japanese man named Toru Watanabe hears the opening bars of The Beatles’ Norwegian Wood and is instantly overwhelmed by memories of his early life when he was a student caught up with two women, the carefree Midori and the beautiful but troubled Naoko. 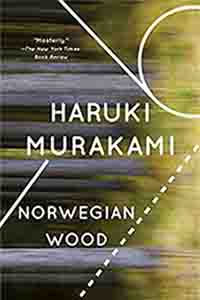 First published in 1987, Norwegian Wood became an enormous hit with young readers in Japan and could be compared to the release of J.D. Salinger’s The Catcher in the Rye. Murakami became hugely famous, much to his dismay, and he has since gone out of his way to avoid the spotlight, despite the success of following novels. Murakami’s fame has since spread to the West and it’s not hard to see why. Murakami is clearly well read when it comes to Western literature and references titles such as The Great Gatsby in his novels.

Despite the fact I’ve never been to Japan, nor am I particularly familiar with its culture, I still found myself easily becoming immersed within Norwegian Wood, more so than plenty of Western novels I’ve read, but that’s not to say the novel feels as though it has been white-washed or aims to pander to Western readers. As I read, I never forgot that this was a book set in Japan and I enjoyed exploring a setting that was a little unfamiliar to me, but I never felt like I was overwhelmed or lost, which is probably, in no small, part due to Murakami’s excellent and well-rounded characters whose lives you become immersed in.

The novel begins with 19-year-old Toru Watanabe in the midst of student life following the suicide of his close friend, Kizuki, a few years prior. He spends most of his time studying, working at a record shop, and going on long walks with a girl named Naoko, who was Kizuki’s girlfriend before his death. The two become closer and closer until eventually, on Naoko’s 20th birthday, the two spend the night together, but soon Naoko disconnects from Toru, explaining via a letter that she needs time alone.

Heartbroken, Toru continues his studies and finds himself becoming friends with an intelligent but cold student named Nagasawa who encourages him to pick up women at bars. During this time, Watanabe meets a lively and outspoken girl named Midori, who he finds himself becoming more and more attracted to in the wake of Naoko’s absence. I don’t intend to spoil the novel for you, but rest assured that the rest of the story had me telling myself I’d finish “just one more chapter..” What really makes the book so compelling is how invested I found myself getting in these characters lives and, even when I wasn’t reading the book, I found myself pondering their situations and hoping in would all work out in the end.

One of the reasons I think Norwegian Wood strikes a chord with readers, is for its themes of mental illness and suicide. Mental health issues carry a serious stigma in Japan and the fact that Murakami was willing to tackle it so openly and honestly is no doubt an important factor as to why the book became such a hit in Japan, particularly among young people. While the West may be further ahead when it comes to understanding and accepting mental health problems, there’s still a certain stigma here and it’s always reassuring to know people are acknowledging these things. I’m by no means an expert on the topic but, from what I understand, the stigma of mental illness in Japan is extremely prevalent and is often seen not as an illness but as a reflection of someone being a bad person. In this regard, not only is Murakami’s book an excellent novel, but has no doubt helped those who’ve read it be more accepting of mental illness and has hopefully provided some comfort to those who struggle with it, particularly in Japan. It’s really not hard to see why young people have flocked to it.

As I mentioned earlier, it’s clear that Murakami is well versed in Western literature, and, as I read, I found myself drawing certain parallels between Norwegian Wood and The Catcher in the Rye. That’s not to say they’re similar in terms of plot, in that regard they’re quite different, but I feel the two novels could be described as kindred spirits. Both are coming-of-age novels that deal with protagonists unsure of their place in the world and both deal with mental illness, though Norwegian Wood certainly takes this further. On a more meta note, both authors were suddenly, and reluctantly, propelled to fame by their novels, and both works appealed particularly to teenagers and young adults. This is certainly one to check out if you’re a fan of Holden Caulfield.

If I had one criticism of Norwegian Wood it would be the fact that Watanabe winds up having sex with just about every woman he meets throughout the story. Don’t get me wrong, I’ve no problem with sex in books, especially in coming-of-age stories, but it got to point where I found myself thinking “Really? He’s even going to sleep with her?” One could argue that Watanabe’s highly active sex life is part of his desire to feel connected to someone, but it struck me as somewhat odd that a character, who seemed to have such little interest in being a charming ladies man, had women falling at his feet. However, that’s not to say that the female characters in the book are simply there for Watanabe to sleep with, not at all.

The song Norwegian Wood opens with the line “I once had a girl, or should I say, she once had me,” and that perfectly encapsulates Watanbe’s relationships with both Midori and Naoko. Both women capture our protagonist in their own way and, by the end of the novel, it’s clear he’ll never be the same after having known them. Though the book’s protagonist may be male, this is arguably a book about women, if seen through the lens of a young man.

Norwegian Wood is the kind of book that I find myself thinking about long after I’ve finished the last page. As my first Murakami novel I found it an excellent starting point and I look forward to reading his other books. I definitely recommend Norwegian Wood to readers who enjoy books such as The Catcher in the Rye and The Great Gatsby and I also highly recommend Murakami’s writing in general. It’s no mystery to me as to why this author has become so well known across the globe and I believe his books will be remembered for a long time to come.