The forgotten feminists of British history

“Roaring Girls ‘pulls back the curtain on women’s history to tell eight extraordinary tales of courage and determination over 300 years.”

Holly Kyte’s Roaring Girls is a history book about eight British women, all of whom lived in Britain in the 300 years before the first wave of feminism. Since then, there have been four waves of feminism to lead us to the rights we enjoy now as 21st-century women, and although we are still a long way from equality, this book goes to show just how far we really have come.

The women featured in Kyte’s book are just eight of millions of women in history that have gone mostly forgotten, until now. The eight women featured in these pages are by no means feminists in the way we understand them now, however, they all, in some way broken the gendered rules of society at the time and lived outside of what a woman was supposed to be like. 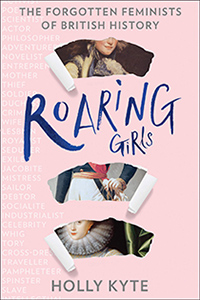 The eight women recorded in this book are Mary Frith (AKA Moll Cutpurse) – the original ‘roaring girl’, a notorious cross-dressing pickpocket, who later became theatre actress; Margaret Cavendish – Duchess of Newcastle-upon-Tyne and philosopher, poet, playwright and essayist; Mary Astell – a writer, and champion of gender equality and women’s education; Charlotte Charke – an English actress, crossdresser known for playing ‘breeches’ and ‘travesty’ roles, Hannah Snell – a female solider who later recorded her adventures in a memoir, Mary Prince – a former slave who campaigned for the abolition of slavery in British colonies, Anne Lister – an English landowner and diarist who many will know as Gentleman Jack; and Caroline Norton – an English author who campaigned for social reform regarding women’s rights and visibility under the law.

These forgotten feminists from British history spanned the full spectrum of the social hierarchy from Duchess to slave “in short all kinds of womanhood”. These women all pushed the boundaries of gender norms in their own way; becoming trailblazers in female liberation and education, exploring sexuality, subverting the traditional gender stereotypes of gentle and quiet females, and even moving towards an identity we would now call ‘non-binary’ by dressing in ‘male’ clothing and exhibiting ‘masculine’ traits. Holly Kyte’s book brings these ‘roaring girls’ back to the forefront and celebrates the achievements of the women that allowed other women after them to make even further steps towards equality.

Holly Kyte’s Roaring Girls is a well-researched and detailed history of these eight women from their highs and lows, their wins and their pitfalls, their feminist steps as well as their less admirable attributes and life choices. Holly Kyte reminds us that these women aren’t perfect but they have, like most of us, lived complicated lives, and have ultimately moved society toward equality even in the tiniest of ways.

The end of Roaring Girls brings us up-to-date with some statistics about equality in the 21st century, from the number of women in positions of power to the current pay gap. These eight women outlined by Holly Kyte, along with many other women from history (and many more who may be lost to the history books forever), can act as inspiration and hope to every feminist striving towards equality today.