“What goes on in these pages makes Lenny Bruce seem angelic… the whole book boils down to a mad, corrosive prose poetry.”

Don’t worry, I won’t tell your parents. Unless your parents are reading this to you, in which case: what are you? Five? The reason I ask this is because if you haven’t taken drugs, you will have no idea what the hell’s going on in ‘Fear and Loathing in Las Vegas’ by Hunter S. Thompson. But, if you’ve ever been laid out on a pool table with your pants on your head reading a Pig Latin version of the Magna Carta out of the stars, you’ll know exactly what’s going on. 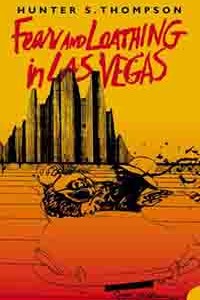 The story is about…eh, how do I put this. The story is about the main character and his lawyer going to Vegas in an extravagant car with enough drugs and alcohol to make Keith Richards suggest an intervention.

The main character claims to be a journalist for some such paper. Or magazine. Or something. He and his lawyer, who’s name is never really established but at one point calls himself ‘Doctor Gonzo’, are going to report on a popular race.

Everything else just gets muddled from there. The narrative is in first person, which makes the story feel like less of the character telling it to the reader, and more like the character has grabbed the reader by the collar and is half screaming, half mumbling the story while high on borderline unsafe drugs, low on sleep, and trying to tell you everything before the cops tackle him.

Now, this book contains a few interesting pictures to go along with the story. And, just like the story, they look like something that was created while on a drug-fueled binge. It adds some visual context to the story, but for the time that this book was originally released (1971) most of the readers then wouldn’t need the visuals and anyone reading it now would probably wonder if the artist is still alive and if he’s okay.

Would I recommend this book? Sure. If you want to see what the world was like through the eyes and mind of a druggie in the early 70’s, go for it. It might actually make you see things in a new light. For those who DO know what the early 70’s were like for a druggie, you probably already know how this book plays out.