“Ian Stansel’s debut dives headlong into the anachronism of the modern cowboy–a beautiful and brutal novel about time: the expanse of it, the burden of it, but, more than anything, the crushing realization when it grows short.”

Just finished The Last Cowboys of San Geronimo by Ian Stansel. This is a debut novel and it is a modern western.

Frank and Silas are brothers.  They inherited a horse business from their Father and they train horses and riders for equestrian contests. There is a terrible sibling rivalry here that has slowly developed into one of violence. And now Frank lies dead, shot down, and Silas is on his horse and on the run. 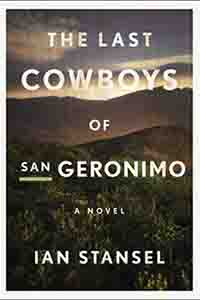 Frank’s wife Lena is on a horse also.  She wants to exact revenge and kill Silas before he is apprehended by the police.

This is a short novel, very well written.  It is so reminiscent of the old western novels, of the hunted being tracked down until the inevitable ending.

I won’t spoil it for you but there are some twists here that make it a little different than the usual for this genre.