Isabel Allende - In the Midst of Winter

“Filled with Allende’s signature lyricism and ingenious plotting, the book delves wonderfully into what it means to respect, protect, and love.”

There are many different facets that come together in this novel written by an exceptional author.

For this work she’s brought together three protagonists..a Professor, a teacher with a visa and an illegal immigrant who all have a past traumatic history which they will reveal as the story unfolds. They all lead a solitary life for the most part until they are brought together during a snow storm and an automobile accident.

Coming together Lucia (the teacher) takes charge more or less and although her methods are a bit dicey we are off on an adventure through the snows and the time they spend together brings them closer together. I knew little about Guatemala or Chile for that matter so I was not prepared for the life these people lead from day to day. 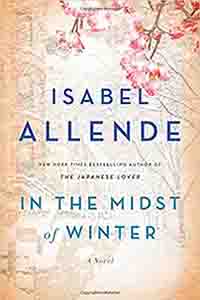 I realize this is a work of fiction, but it has to hold some truth to it. I felt so much empathy for what these people endure every day, it’s heartbreaking.

The synopsis that accompanies the book is spot on and I highly recommend reading it before acquiring the book.

I do recommend it as a very well written, thoughtful and engaging work.

The book begins with Richard Bowmaster out driving right after a large snowstorm has hit Brooklyn, New York and he has a slight accident as he crashes into another car being driven by a woman named Evelyn Ortega, who becomes very upset about the accident and is set to drive off without getting the insurance information.

As she is about to drive off, Richard givers her his business card. The next day she will arrive at Richards door. Since Evelyn speaks little English, Richard calls upon his tenant, Lucia Marat to help him.

Thus begins the story, which in a way, could be ripped from today’s headlines. Evelyn is an illegal immigrant from Guatemala who escaped her country because of violence. Her plight will draw in both Richard and Lucia.

All of their backstories will be told in detail, and what you end up with is a crazy adventure and three people forming a bond that probably would never had happened except for the original chance encounter.

Allende is a great writer, and if you have read her before, you shouldn’t be disappointed. For those new to her, while not comparable to her best work, it’s an enjoyable read and at 340 pages you can knock it off within a week.