A. J. Jacobs. - The Year of Living Biblically

“Jacobs has two great strengths as a writer. One is his extreme open-mindedness…the other is his humour, which he uses with precision and some subtlety.”

In The Year of Living Biblically, A.J. Jacobs takes the reader on a jaunty, jovial exploration of profound questions concerning the most popular, if not the most influential, text of Western European history, the Bible. In the author’s disclosure, Jacobs credits a somewhat spiritually adventurous and erratic uncle, Gil, for the idea for the book, and attempts to outline the protocol for what he considers a “literal” obedience to the text. He states:

“It’s a good bet at one time or another in history, every single passage in the Bible has been taken as literal. I’ve decided I cannot do that. That’d be misleading and unnecessarily flip…(pg. 10). 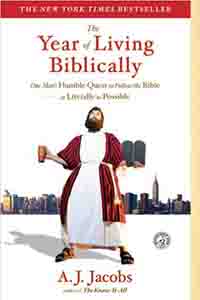 But I would maintain that that is precisely what he continues to be through the rest of the text. Jacobs writes like a stand-up comedian that doesn’t like the stage. As an editor of a magazine that he arguable calls “a tastefully lascivious men’s magazine,” I would have suggested that the reader not look too expectantly for truly deep insights or weighty reflections, but those are definitely to be found here (running a bit more to the ethical rather than the theological). Highlights include ruminations on theft (that lead to observations on rationalizing) stoning, coveting and purity laws. The food laws are where Jacobs’ comedy truly shines, but it’s surprising that there is no mention of the Python Whizzo Chocolate skit in the portion concerning food laws and “microlivestock.”

He states that in trying to live the literal dictates of the Bible he’d:

“be living it….If I had a mystical side, this year would bring it out of the closet. If I wanted to understand my forefathers, this year would let me live like they did, but with less leprosy (pg. 6).”

Of course, he suggests, with no less humour, a weightier, more germane motivation; what is the Bible really saying? Can we follow it literally? Here the reader encounters the premise, the thesis and probably the reason most people are interested in the book. We all know the answer before the end of the book, but the journey is as, or more, interesting as arriving at the destination…if a destination can be reached at all in theological and spiritual matters.

One particularly poignant and timely part of “living Biblically” that stymies Jacobs’ attempt to follow the letter of the Biblical Law or the spirit of the letter of the Biblical law (since some forms of literalism are literally ludicrous and perhaps physical impossible) is the sin of lying. Jacobs, like many writers before and many hence, struggles with verbal deceits citing that “white lies” are often more caring and compassionate than the true. He cites the telling a friend you are sick to avoid an appointment with him or her only to have the friend show up with chicken soup and reveal the untruth. Isn’t this a cop out? Perhaps, what is needed isn’t a pass on certain types of lies (e.g. reports versus subjective judgments), but a much more sophisticated way of telling the truth. Crafting answers to empower and uplift can be done even in negative situations, but in a modern world of expedience, convenience and instant gratification, verbal and conversation finesse has been abandoned.

The Year of Living Biblically is light, addictive reading with some thought-provoking scrutiny of the Judeo-Christian influence in modern North American (although more specifically and a somewhat removed New York) culture, a benefit of which is additional reminders of how culture away from historic, geographical context even from a near remove can be perplexing, unfamiliar and feel inaccessible. From a small city background in Canada, New York culture is anomalous to my experience. Attempts in Saskatoon to engage in the type of mid-winter, New York “suiting up” on some days HERE would be a risking one’s life.

The book is definitely a step-up from Know It All, his previous comedic non-fiction narrative in that it balances the true spirit of inquiry with the humour of human paradox and absurdity. As Jacobs’ experience and book draw to a close, the reader feels that questions have been both deeply posed and considered philosophically as well as sardonically. It makes The Year of Living Biblically a far superior read on a number of levels.

Part of Jacobs’ charm is the quirky, winsome quality of his writing, but ideas are scattered and incoherent at times. He often distributes quick facts a la Mental Floss (a magazine the author contributes to) that are fun and interesting, but feel uneven. Rambling narrative can make for easy but–at times–frustrating reading, more so at the beginning. Threads that are taken up are dropped (if not mixed—pun intended) leaving too many thoughts worthy of exploration dangling. The author’s internal commentary and analysis is engaging, but still doesn’t feel perfectly authentic throughout. Perhaps, this is akin to the force that compel “reality television” to script scenarios. Few can be witty and enchanting, or delightfully absurd all the time (unless part of a collaboration like Monty Python). Also, a very serious in-depth analysis of the foibles, quirks and perplexities would impede the easy flow of Jacobs’ recount. So take it with a grain rather than a pillar of salt.