“A good introduction to LOTR fans nervous about taking on The Silmarillion, and also gives longtime fans a fascinating look at the Tolkiens’ myth-making process.”

J.R.R. Tolkien is considered by many to be the father of modern fantasy, a title he arguably deserves. The world of Middle-Earth has captivated readers across the globe ever since it was first brought to life in The Hobbit.

Tolkien went on to flesh out Middle-Earth until it was as complex and steeped in lore and legends as our own history is. The most famous tales to come from Tolkien are of course The Hobbit and The Lord of the Rings, but they are only a small part of the legendarium that make up the world of Middle-Earth. 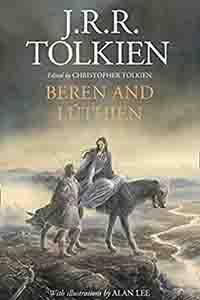 Those familiar with The Lord of the Rings will be aware of the romance between a mortal man named Aragorn and the immortal Elf named Arwen. Though it seems there can be no happy ending for the two, their love for one another endures and the two are united at the end of the books. Aragorn and Arwen’s romance is in fact an allusion to a love that existed between a man named Beren and an Elf named Lúthien that occurred thousands of years before the War of the Ring, and that in turn was inspired by Tolkien’s own romance between he and his wife Edith. The tale of Beren and Lúthien is arguably the most personal story for Tolkien and he believed it to be one of the most important stories in his legendarium, so much so that he stated in his will that he and his wife’s graves should bear the names ‘Beren’ and ‘ Lúthien’.

The story of Beren and Lúthien tells the tale of a man named Beren who falls in love with Lúthien, the daughter of the Elvish king Thingol. The two soon begin a romance but King Thingol deems Beren to be unworthy of his daughter and agrees only to allow the two to be married should Beren be able to complete the impossible task of returning one of the three hallowed Silmarils that were stolen from the Elves by the dark lord Morgorth, a precursor of Sauron’s. Beren then sets on a journey to recover one of the Silmarils and is aided in his quest by Lúthien. The story of Beren and Lúthien and their hopeless love for one another is one that has echoed through the ages of Middle-Earth and remnants of it can be traced thousands of years later in the relationship between Arwen and Aragorn. 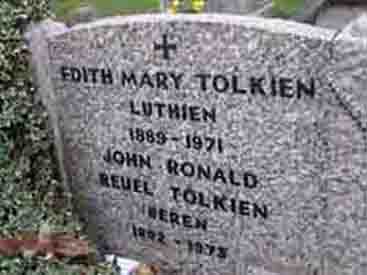 The importance of the tale lies in the fact that it was inspired by Tolkien’s own love for his wife Edith, and many parts of the story are directly influenced by their romance. Edith and Tolkien met when he was 16 and she was 19 and the two quickly became close. However, Tolkien’s guardian felt she was a distraction to the young lad and forbade him from seeing her until he turned 21. Their relationship was also frowned upon by both sides as Tolkien was Catholic and Edith an Anglican. During their time apart, Edith became engaged but agreed to marry Tolkien after he wrote her a letter on the eve of his 21st birthday declaring his love for her. The strife caused by their relationship inspired the difficulties Beren and Lúthien endure and one of the most famous scenes, where Beren first encounters Lúthien dancing in a glade was directly inspired by an occasion where Edith danced for Tolkien in a glade of flowering hemlocks.

The original tale of Beren and Lúthien has gone through several iterations since its conception and the final version was first published after Tolkien’s death in The Silmarillion. In 2017, a stand alone edition of Beren and Lúthien was published which gives readers a comprehensive look at the story itself, as well as the earlier versions of the story and how it changed and evolved over the years as the world of Middle-Earth began to take shape. The book has been painstakingly edited by Christopher Tolkien using his father’s manuscripts. Excerpts are also taken from The Silmarillion and Lost Tales as well as early drafts and poems to provide readers with the most detailed look at the story as possible, complete with annotations from Christopher which explain any discrepancies or inconsistencies that may be present due to the numerous changes made to the story with both characters and events. The book also includes beautiful illustrations drawn by long-time Tolkien illustrator Alan Lee and serves as the ultimate source when it comes to examining what is arguably one of the most important and touching tales found in Middle-Earth.

The appeal of Tolkien work is that is can be enjoyed on many levels. There are no doubt many people out there who have enjoyed the film adaptations of Tolkien’s work, whilst others may have delved into The Hobbit and The Lord of the Rings, and then there are those who have know Middle-Earth almost as well as Tolkien himself and have read everything that was published during and after the author’s death. To the more casual reader, jumping into what you might call the expanded lore of Middle-Earth may seem an intimidating task, indeed there is a lot of it, but the stand alone books that have been published for what Tolkien deemed the most important stories prior to The Hobbit, (Beren and Lúthien, The Children of Hurin, and The Fall of Gondolin) is that they allow newcomers to discover these tales independently, whilst also explaining why they are so essential to Tolkien’s legendarium and how they helped shaped the history of Middle-Earth. This in turn inspires readers to dive deeper into Tolkien’s fantasy and will no doubt encourage newcomers to explore further with The Silmarillion. Those already well versed with Tolkien’s stories will also be interested to see how these stories they know so well have evolved over the years as Tolkien began to map out his world. Given Tolkien’s attachment to Beren and Lúthien, this book is arguably the most personal of the stand alone books.

The Hobbit and The Lord of the Rings are still the best place to start when it comes to reading Tolkien, but Beren and Lúthien is an excellent steeping stone for those eager to explore more of Middle-Earth but feel a little overwhelmed by the darker and denser Silmarillion. Once again, Christopher Tolkien has done an excellent job in bringing more of his father’s vision to life whilst also showing a great deal of respect to the source material, at the age of 93 no less! Beren and Lúthien is a treasure for the both those new and familiar to Middle-Earth and it’s certainly a worthy edition to the legendarium.