Jack London - Call of the Wild

“Call of the Wild is a book that anyone who adores the outdoors should read.”

Originally serialised for the Saturday Evening Post over the Summer of 1903 before being published in book form, Jack London’s modern classic Call of the Wild tells the story of a pampered dog named Buck, a St. Bernard-Scotch Shepherd mix, who enjoys his lazy and spoiled life living on a ranch in sunny California. Buck’s carefree life is soon turned upside-down when he’s stolen and forced to begin a new life as a sled dog for prospectors travelling from Alaska to Canada during the Klondike Gold Rush.

On surface, Call of the Wild appears to be a simple tale about a domestic dog getting in touch with his wild side, but the novel has much more to say than that. This is a book that explores nature VS nurture, man’s relationship with the wild, survival of the fittest, pack mentality, violence, modernity, instinct, love, hate, cruelty, and listening to one’s own heart, to name but a few. There’s certainly a great deal to unpack in this relatively short novel. 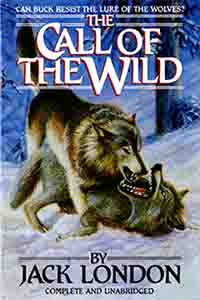 Call of the Wild may seem like a children’s book, an easy mistake to make since some editions include illustrations, but this is one book you’ll want to hold off on reading to your young ones at night, at least until they reach a certain level of maturity and understanding. I’ve no doubt this story paved the way for titles such as Watership Down and may have been inspired by the likes of Rudyard Kipling’s The Jungle Book. This is not a cuddly story about a dog, and it’s loaded with violent imagery and heavy themes throughout.

I don’t want to go any further into the details of the plot, as I found it to be incredibly absorbing and there are plenty of twists and turns along the way. Buck is initially scared and confused by the new life he finds himself in, but it’s not long before he begins to become an integral member of his pack, and soon he has his eyes on becoming the leader. Our canine protagonist soon discovers humans can vary as much as dogs, and disaster strikes for him and his pack after they’re sold to an inexperienced and arrogant trio of prospectors who vastly underestimate the dangers of sledding. The main narrative focuses on Buck’s transformation from a soft, domesticated dog, into an untamed and bristling hound who has become attuned to his wild instincts. Indeed, by the end of the novel, Buck is more wolf than he is dog.

While Call of the Wild focuses heavily on animals and nature, I couldn’t help but feel London was really using animals as a stand-in for people. Prior to writing the book, London spent much of his time in the Yukon, and his experiences there inspired much of this book. Like Buck at the beginning of his journey, humans have generally become soft to the world around us. Dump the average person in the middle of Alaska and they’d probably soon be dead, I know I would be, and yet, like domesticated dogs, our ancestors were tough survivors who endured long enough to get us where we are now. Call of the Wild repeatedly asks how far removed are we from our wild instincts, are they still buried deep within us somewhere, what would it take for them to reawaken, and could we ever turn back once they’ve taken hold? It seems one need only take a look at prison life to see how tough environments filled with danger can quickly revert us back to a pack mentality where only the strong survive, in order to answer these questions.

London’s book also examines man’s relationship with nature, and how our attempts to dominate and master it are ultimately useless and lead only to pain and destruction. Characters like the spoiled and arrogant Charles, Hal, and Mercedes are prime examples of this, while those who don’t attempt to resist nature and go along with it find the path to be much easier going, as seen in the character of John Thornton. Written in the opening years of the 20th century, London would’ve been witness to the ever increasing industrialisation of America and the death of frontier life in the Old West. I’ve no doubt all of this would’ve been playing on London’s mind as he pieced together this story and, in some ways, Call of the Wild can be seen as a reaction to the apparent domestication of America.

Reading Call of the Wild, I was also surprised at how London explores Buck’s primitive nature that lies within in him and calls back to his ancestors. There are a number of passages that describe Buck sensing the presence of his ancestors, and the ancestors of modern man, and I was struck at how accurately London appears to understand the science of evolution and natural selection. No doubt London learned plenty about such ideas through experiences of his own travels but, given that Charles Darwins’ The Origin of Species was published only a few decades before London began work on Call of the Wild, and given that there are still people today who refute the idea of evolution, I’m genuinely impressed at how competently London explores these themes.

I was also pleasantly surprised to find that, despite being over 100 years old, London’s writings have aged a lot better than many of his peers when it comes to issues of race, gender, and social politics. I’m not about to pretend that London doesn’t use any terms and phrases that are rightfully unacceptable today, but I never got the feeling he intended his non-white characters to be any more or less flawed than the white one. No, this book doesn’t read like London was a super socially aware guy, at least not by modern standards, however its certainly aged better than many books that came after it and, given that Jack London was a white man born in the late 1800’s, he comes across as surprisingly progressive.

Call of the Wild is a book that anyone who adores the outdoors should read. You should also add it to your reading pile if you’ve any interest in dogs or nature in general. I’m amazed that such a short story can contain so much to unpack, and it’s the sort of book I look forward to reading again in future, I’m sure there’s plenty I’ve missed on my first go-around. As my first Jack London novel, I see why he’s so highly regarded in the world of literature and I look forward to reading his other works.