“When a Japanese family is found brutally murdered, three men and one woman are summoned.”

Since I was first given American Tabloid one Christmas many years ago, I’ve bought each new Ellroy book as it’s thudded onto the shelves – leaving a blood stain as it does – and devoured his back catalogue.

That is to say, this won’t be an entirely unbiased review: I love James Ellroy and the way that he writes. Only more delighting to me than the appearance of a new book was the news that it’s the first part of a new quartet that promises to tie together the now enormous semi-fictional universe the LA writer has assembled over two previous series. 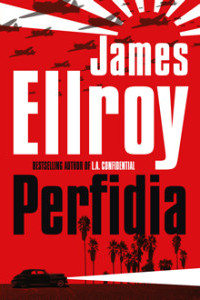 Perfidia is a song about, well, perfidy, or treachery and betrayal. Remember “perfidious Albion”? Well, this is perfidious California.

And almost everyone is untrustworthy, dishonest, psychopathic really.

Ellroy’s nearly-700 page latest opens on December 6, 1941. A Japanese family, the Watanabes, have been killed (or perhaps killed themselves) in their small Highland Park Home. There are ceremonial swords, a cryptic note on the wall, Axis-powers cash and blood everywhere. Already it’s more than just another case for the LA cops who tackle it.

The following day, Pearl Harbour is bombed and the case gets an historic importance as the Japanese round-ups commence and a jittery state peels its eyes for fifth columnists. Japanese (and closeted homosexual) forensic genius Hideo Ashida is going to have a hard time.

They will recognise the style too. Short, sharp, machine-gun sentences; vividly described violence; very raw language packed with racial epithets, four-letter words and homophobia, misogyny and every other prejudice you can think of.

If you don’t think you’ll like that then stand well back. And don’t believe the book jacket, if you’ve not read Ellroy before take a look inside and read a few lines. If you think the style is going to drive you mad then put it down, or head for his earlier, less stylistically radical crime novels.

Here’s a fairly typical line: “He hit a small compartment. He saw a might-be Jap or might-be chink torching currency and tracts. Parker was this close to him. The money and paper flared into black ash.”

It’s also worth mentioning that the plot is enormously complex, there are a great many characters and Perfidia is very long.

Ellroy has spoken of his take on history as “bad men doing bad things”. Here they are very bad indeed. It’s hard to think of a character who might be described as sympathetic. All authority is corrupt, almost everyone is racist (particularly those in authority), most are violent, everyone is double-dealing… it’s intense and exhausting, there is little light and a lot of shade.

This hasn’t been my favourite Ellroy… yet. It didn’t grab me from the off as most of his novels have, coming into its own in its second half, I think. It travels at 300mph in many directions, sometimes losing focus. Ellroy characters spend most of their time in extreme situations or states of mind, but here it seems to sometimes stretch credibility that they don’t simply break down. Too few characters seem to have their own voices – almost everyone speaks as James Ellroy writes.

I still very much enjoyed it though. I’ll read it again, certainly before the next volume – which I’m already eagerly awaiting – comes out.