A True Story of Love, Spies, and the Unlikely Heroine Who Outwitted America's Enemies

“This is the best work of nonfiction I’ve ever read–no hyperbole…Fagone has painstakingly worked backwards to piece together a truth that has been buried for too long. In the process, he has helped Friedman gain recognition as the American hero she was.”

I was fascinated by this woman, Elizebeth Smith Friedman and grateful to the author for writing this work. A chance encounter while searching for a job, she became a recruit at Riverbank owned by an eccentric George Fabyan to work with a lady who was trying to prove that Francis Bacon left coded messages in Shakespeare’s First Folio printed in 1623. Elizabeth would meet a biologist there who would become her husband and together they became expert in the field of solving puzzles or breaking codes. “They snuck into vaults of text, sometimes alone, sometimes together, feeling for the click of the bolt. Their lives became a series of increasingly spectacular and improbable heists. 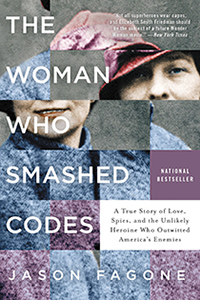 They used science to steal truth” excerpt from book page. 30. As we follow Elizebeth and her husband William Friedman throughout their careers in government service it’s plain to see that this couple were true patriots and I really felt they were undervalued and underpaid during their lifetime. Excellent and educational biography.