“Fans of Jasper Fforde’s unique blend of comic dystopia and quirky British cosiness will not be disappointed with his first novel in six years, Early Riser. . . . Hilarious.”

This is a book written by the inestimable Mr Fforde after a creative hiatus of some 18 months.

All of the typical Fforde elements are present: an absurdly dystopian alternate UK with a somewhat cavalier disregard for the sanctity of life, a sinister corporation which is so closely integrated into society as to be as good as an institution, and a naïve protagonist who finds themselves thrown into the resulting maelstrom with often scary and darkly humorous consequences. 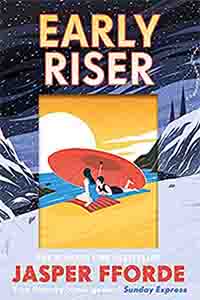 I’m sorry to report that I didn’t find this nearly as gripping as the “Thursday Next” and “Nursery Crimes” series or “Shades of Grey”. I found myself wanting to do other things during my reading time rather than read this. Don’t get me wrong, it’s not a bad story and for anyone else would be considered extremely good – but Fforde has previously set the bar very high and I just didn’t think this quite gelled. It had a slightly hurried, disjointed feel about it which was not present in his previous works. I’m really hoping this was just a glitch on the way to recovering his writing mojo.

Be that as it may, it has some great ideas in it (and the usual wonderfully creative language that is present in his earlier books). If you’re a long time Fforde fan, you won’t want to skip this – and if you’re new to his work, read this first (it’s a stand-alone story that doesn’t need any knowledge of anything else he’s written) and then take a look at his work mentioned in the above paragraph.