“The Glass Castle” is a real page turner – – I couldn’t put it down and finished it in about four hours – – a record for me!” ~ Amazon reviewer

The Glass Castle is a memoir of Jeannette Walls’ life with her dysfunctional parents and her three siblings. From the first few pages it becomes clear that the Walls family is no ordinary family. They live by nobody’s rules but their own.

Jeannette is cooking her own dinner at three years of age and whilst doing so ends up in hospital for weeks on end badly burnt. They live wherever they land often sleeping in the desert, following their father on his constant search for gold to fund his dream of building a glass castle which he has lovingly drafted in intricate detail 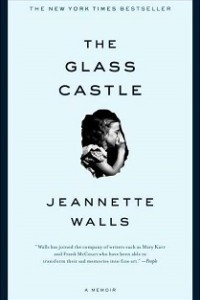 This book left me with such conflicting emotions, especially regarding the father. I liked the father. There I’ve said it! I couldn’t help it. Despite his alcoholism he really did love the kids and he taught them so much, about science and nature and the world in general. He just really did not want to live in a Capitalist world where he would be trapped. The problem was, living the life he wanted to was to the detriment of the kids he loved so much. When his drinking became worse he was hateful; ruining Christmas and stealing money amongst other things. But the things he gave them, non-materialistic things, were beyond compare. And while I would never try to justify his failings, they were great indeed, there were a lot of positives that other parents could take note of because sitting your child infront of the TV or Xbox all day is not clever either.

The mother on the other hand left me furious. She had no business having kids, she did not have a maternal bone in her body. Quite early on in the book when Jeannette is only four or five years old she falls out of a moving car, cutting her face up quite badly. She then has to sit by the roadside waiting for the car to return as they haven’t noticed that she has gone. When they do return the father jumps out and tenderly cares for his daughter. The mother just sits in the car waiting.

She is beyond selfish. She won’t work even though she is a qualified teacher and there are huge shortages. She just wants to concentrate on her art and herself even though her kids are half starving.
When there was no money in the house, the kids found a diamond ring and wanted to sell it and buy food but their mother insisted on keeping it because it improved her self-esteem and that, she said, was far more important.

Jeannette Walls tells her story in a calm non-judgemental way. But as she moves towards adolescence her faith in her parents is compromised and when Lori, her elder sister, decides to get out, Jeannette makes the move as well. They both end up in New York and make decent lives for themselves being joined by their brother later.

The only one of the children who was badly affected by their upbringing was the youngest girl Maureen who had perhaps been protected from the worst of her parents’ excesses by her elder siblings and found it difficult to survive on her own.

This book has a lot to recommend it. It is harsh but at the same time uplifting. It makes you mad but then makes you chuckle. Moreover it shows you that children are a lot more resilient than they are given credit for and in this over-cosseted world that is worth remembering.