“The gripping, eye-opening true story of a murder which riveted Canada and became a rallying cry for justice, by an award-winning reporter.”

Red River Girl by Joanna Jolly is a true crime book that examines the death of a young Indigenous girl, Tina Fontaine, whose body was pulled from Red River, Winnipeg in August 2014.

Although the focus is clearly on this one case, the author also looks at the broader problem of the sheer numbers of Indigenous women and girls who die or disappear each year in Canada, with little to no success in identifying their killers or what happened to them.

The book opens with the discovery of the body, and the difficulty of identifying the young runaway, before going on to spend some time discussing Tina’s childhood, family and upbringing, as well as how she ended up in the care of Child and Family services before becoming a runaway and heading for the big city. 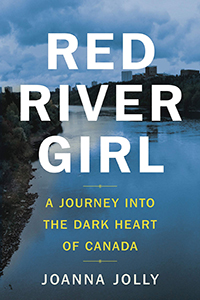 The investigation into her death was run by a Sgt O’Donovan and his homicide squad , and they struggled to pin down her last few days in the city, and who were the last people to see her alive. The investigation uncovered some disturbing and truly shocking information about police procedures. most notably that she was picked up by police in the hours before she died, and let go again despite being listed on their system as a minor and a runaway.

Eventually the police were able to narrow their investigation down to a single suspect, and set out to elicit a confession using an unorthodox sting type operation . We follow the behind the scenes details of the investigation ,from Tina’s identification to the arrest and trial of the suspect for her killing, and the shock and disappointment , especially among the Indigenous community when he walked free.

This in depth look made for a fascinating ,and at times upsetting read, and kept me hooked as I followed the efforts to find and then convict her killer. I also thought the author did a good job of bringing Tina to life on the page, her story was treated with respect and compassion. Since this young woman’s unfortunate demise, the Canadian government has run a national inquiry into the deaths of Indigenous women, and earlier this year described it as a genocide, and given some of the examples in this book, am not surprised at that description.