John Boyne - A Traveller at the Gates of Wisdom

“An ambitious, epic sweep of a book…John Boyne brilliantly and economically creates a sense of history and place… an enthralling read.”

Just finished A Traveler at the Gates of Wisdom by John Boyne. Audio book version, narrated by Tim McInnerny.
First let me say I am a fan of John Boyne but I did not love this book.
It is the story of a family, husband and wife, two sons and a daughter, with one son having left the family and cannot be found.
This story well evolve from 1 AD to the present day and beyond that, with this family’s history told through out the years, basically the same people with different names but the same story line continuing through out time. The father is always very tough, usually a military man, the son who is the main character of the book is always an artisan of some sort, the sister is always unhappy, being forced to marry over and over again, and the missing son, with a personality much like the father, reappearing from time to time. There is a continuous search for a cousin who is responsible for the death of the main characters wife and son. I can’t give you names because they constantly change throughout the book, depending on location of the character. 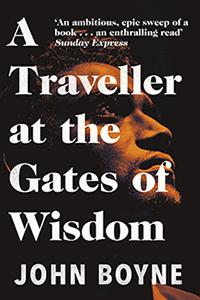 The basic story itself is interesting, but why the need to travel through all the ages, meeting many historical figures along the way, adds little to the story in my opinion. Frankly, this was a tough book to review because of the need to explain how it is written.
Some people I’m sure will enjoy this book, but for the average reader, I would stay away from it. It was so disappointing because John Boyne is a terrific writer.